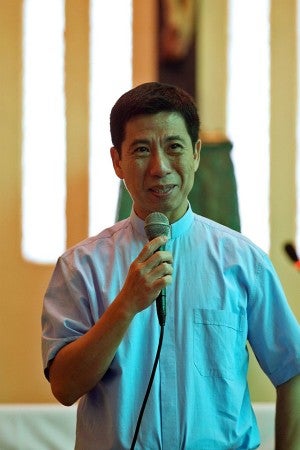 LET President Rodrigo Duterte do his thing for now.

So was the message conveyed by Msgr. Joseph Tan, media liaison officer of the Archdiocese of Cebu, following the declaration of martial law in Mindanao and plans to possibly extend it throughout the entire country.

Tan also called on the people to give President Duterte the chance to prove that he imposed martial law for the good of the people.

“Let us give the president the trust that he is doing it for the right reason under the right conditions. Let us respect that for now, and let us see what will happen after 60 days. If he decides to prolong it, (then) we will examine if the situation warrants it,” he said in an interview on Thursday.

“Let us cooperate and let us not add things that are not there solely because we are operating from the historical past. The President does not need an extension of office because he has just started. He is clearly not doing it for that reason, and he’s not creating a political dynasty, so let us take that away from our mind.”

He also said that he understood the predicaments of people who oppose martial law, but stressed that its current implementation is different from what was imposed by the late dictator Ferdinand Marcos in 1972.

“I know that in everybody’s mind, when we speak of martial law, we cannot dissociate it from our historical past under the late President Ferdinand Marcos. Just recently, President Duterte declared martial law in response to the violent attacks directed to Marawi, including the Catholic Church,” he said.

“I want to remind people that these are not one and the same issues. Past is past, and we are looking at the present. Martial law is a provision given by the Constitution and its intention is for the good of the citizens. The President has the right to pursue it in view of the greater good of citizens although in the past it was used to perpetuate a term of dictatorship,” he added.

Despite this stand, the monsignor also encouraged the public to be vigilant against any abuses in the imposition of martial law.

“We certainly have learned a lot from the past which will hopefully make us better prepare for this martial law now. Hopefully, by being vigilant, abuses will be avoided. Let us make sure that nothing of its abuses will be repeated,” he said.

Around 20 people have died in the fighting, including 13 militants and five soldiers, said Lt. Col. Jo-ar Herrera, a military spokesman, yesterday.

In a press conference in Manila on Wednesday, President Duterte said he may also declare martial law in Visayas and Luzon to stop terrorists from sowing violence in other parts of the country.

Tan encouraged the people to pray for peace in Marawi and the rest of the country.

The Islamic State–linked Maute group has burned a church and taken hostage Fr. Chito Suganob, a Catholic priest, and four other civilians in Marawi City.

More than the ruined church, Tan said the Catholic Church is more concerned of the people — Catholics and Muslims alike — who are affected by the ongoing armed encounter.

“Although it is painful for us to lose the church, it is nothing compared to the fear and anxiety that is in the heart of the kidnapped victims. The house of God we can always rebuild, but it is the lives of people that we are concerned of right now. Our immediate action is to pray that victims and their families will come out safely without physical harm or even psychological damage,” he said.