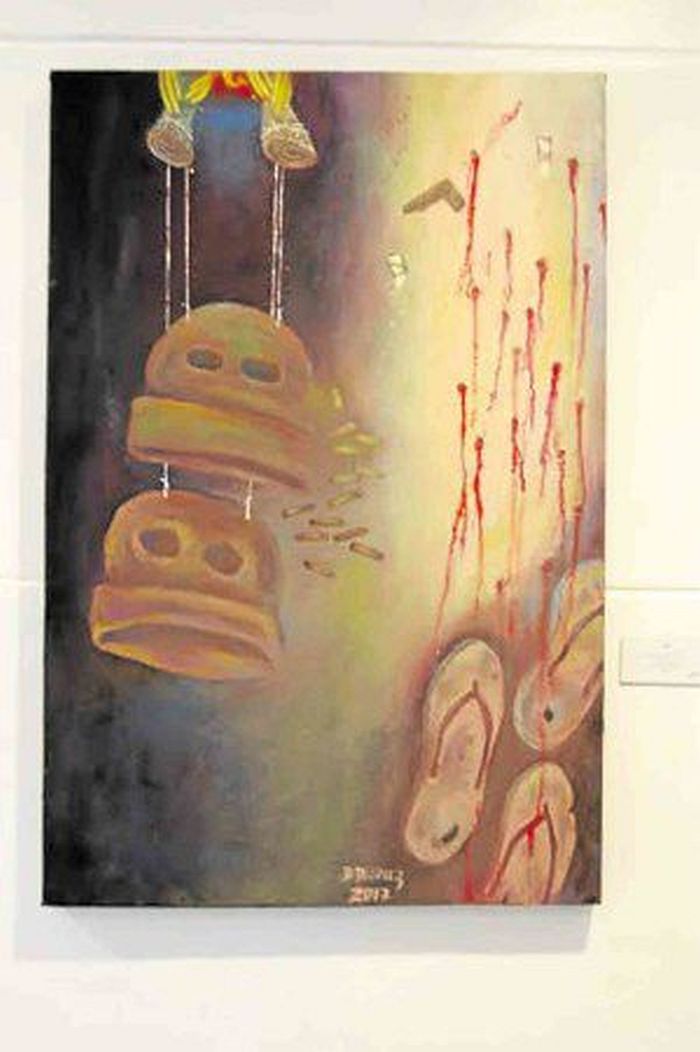 LOS BAÑOS, Laguna — Bright red, a color easily associated with blood and gore, glared throughout an exhibit mounted by a group of artists based in Los Baños town in Laguna province.

“We want to show that art is not merely art but it is too about being involved,” said Angel Bisquera, 24, the “Pangalawang Tuktok” (peak 2) or head of

“Makisining.” The group is composed of professional artists from this town, known for Mt. Makiling, the highest point of which is called “peak 2.”

On May 19, Makisining launched its visual art exhibit at Haraya bar and art space here.

Aside from Bisquera, the other participating artists were siblings and doctors Sayid and Nico Cedicol, Buenaventura Cruz, Doel Mercado, Marvin Oloris, Rodante Alarcon and Paul Hilario.

Students from the graduating Joya-Montano batch of the Mt. Makiling-based Philippine High School for the Arts also contributed a collaborative work to the exhibit.

Bisquera’s piece, “Judgement,” depicts a contorted human figure on a crucifix painted on a red canvas.

Oloris’ “EJK Starter Kit” features a couple of images drawn with a chalk on canvas painted with red acrylic. Among the images are a packaging tape, a carton box, a pistol, and a police badge.

“We thought this was a good time to run the show as we see these things happening around us,” said Hilario, who co-owns Haraya with photographer Al Benavente.

Hilario, a 45-year-old painter, worked on his piece, “Complete Blood Count,” several weeks before the show.

But instead of fiddling with a paintbrush, Hilario used red candle wax that made his art look like blood spatter.

A total of 5,950 drops filled a three-by-four-feet canvas.

On opening night, a mannequin wrapped with packaging tape was seen sprawled outside the bar.

Guests were also asked to participate in an “interactive” art by splattering melted red candle wax on an empty canvas similar to Hilario’s piece.

“We hear about EJKs often from the news that people have somehow become desensitized to the killings,” Hilario lamented.

Street killings have become regular news since President Duterte launched his administration’s crackdown on illegal drugs. The government, however, had repeatedly denied that the killings were state-sanctioned.

“There were guests, mostly foreigners, who were reluctant to come (to the exhibit) or some artists who begged off because they were scared it might have some political implication,” Hilario said.

“But we are neither pro nor anti (the administration),” he added.

“We just wish to raise awareness and encourage people to talk. These things happen very close to us. We don’t need to wait for a friend, a relative, or a brother to be the next victim,” Hilario said.