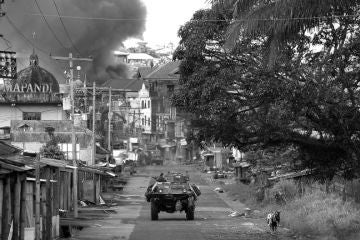 A Philippine Marines armored personnel carrier speeds away as black smoke billows from burning houses after military helicopters fired rockets at militant positions in Marawi City in this May 30 photo.
/AFP

DAVAO CITY – Defense Secretary Delfin Lorenzana on Saturday said the government now believes that the fighting in Marawi City was being backed by the Islamic State because of the way the armed men were behaving.

Lorenzana told reporters at a press conference in Marawi City, which was aired live on TV, that it also appeared the armed men were determined to fight it out to the last man or bullet.

“Yes, we believe this is ISIS, because you know normally in this kind of conflict, the local armed groups will just scamper away and maybe hide in the mountains. But surprisingly, this group just holds out there and waits to fire it out maybe to the last (bullet),” he said.

Another piece of evidence, Lorenzana said, was the death of eight foreigners who fought alongside members of the Maute group and the Abu Sayyaf, led by Basilan-based Isnilon Hapilon.

“Yes we were able to get some info that eight foreigners were initially killed during the first couple of day days of the fighting. Two Saudi nationals, two Indonesian, Two Malaysians, one from Yemen, one from India and one Chechen,” he said.

Lorenzana said there might have been other foreign fighters killed in the battle.

He said the arrival of foreign ISIS fighters, who were not Asians, were surprising and that he even asked officials how this happened.

Lorenzana said as for Malaysians and Indonesians, they looked like Filipinos so it would not be surprising if they came in undetected.