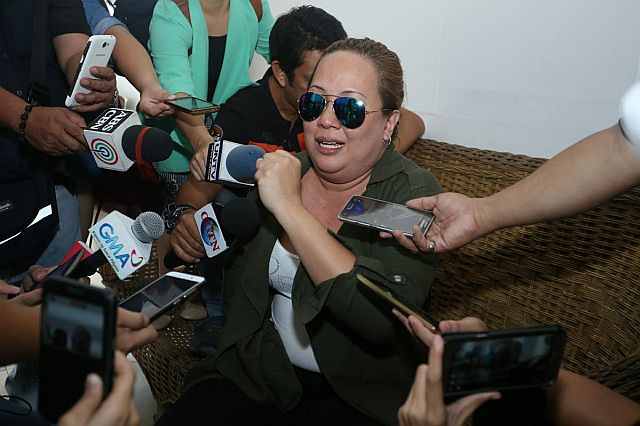 Angela Leyson, best friend of Bien Unido Mayor Gisela Boniel, narrates to the members of the media what she witnessed on Wednesday dawn. (CDN PHOTO/LITO TECSON)

CEBU CITY–The mayor of Bien Unido town in Bohol was believed to have been thrown into the sea after she was shot dead by his captors on Wednesday, according to the police.

The police were scouring the waters off Punta Engaño in Lapu-Lapu City where the body of Mayor Gisela Boniel was reportedly dumped.

“We are checking the water off Punta Engaño because we received reports that it was thrown there,” said Senior Supt. Jonathan Cabal, head of the Regional Intelligence Division based in Cebu City.

Gisela and two other companions were reportedly housed by her husband, Bohol Provincial Board Member Niño Rey Boniel at the Bien Unido Dive Camp on Tuesday.

The victim’s best friend, Angela Leyson, said they were asked to stay overnight in the resort. But on Wednesday dawn, Leyson noticed something was wrong.

While they were inside the room, she said several men suddenly came in. One of them covered her mouth with duct tape.

Someone tasered her in the neck, causing her to lose consciousness.

As her vision was about to dim, she heard Gisela telling her husband: “In-in ( Niño’s nickname) ayaw si Lala (Angela) kay naa ang iyang anak sa pikas room (In-in don’t include Lala because her son is in the other room).”

Leyson was with her 17-year-old son.

That was the last time Leyson saw Gisela.

Leyson said one of the perpetrators pointed a gun at her and threatened to kill her if she would report the matter to the police.

Leyson said they were led out of the room and were brought to Tubigon town before they were released.

But she reported the incident to the police who then arrested the abductors – Niño, Randel Lucas, who served as driver; and Kevin “Etad” Boniel, Niño’s cousin.

Cabal said it was Kevin, who shot dead the victim.

Leyson said Niño and Gisela had a fight over financial matters.

The couple’s friends in Bohol said Niño got angry at his wife when he learned that she loaned a watch worth P2.5 million.