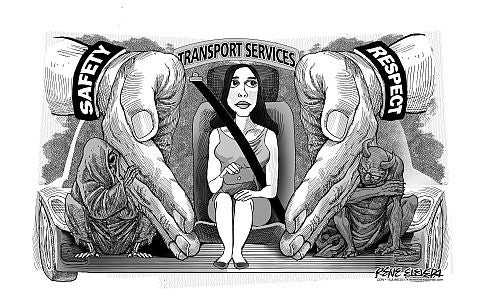 As if we don’t have enough problems dealing with errant passenger jeepney and taxi drivers, now the commuters especially women should watch out for transport network vehicle services (TNVS) drivers contracted with Uber, Grab and others with more than just a passing interest in their clients.

The recent case involving one such client in Metro Cebu who was headed to a bus terminal is certainly not an isolated case, nor will it be the end for commuters whose wish for a safe and convenient ride to their destinations is derailed by the driver’s insidious designs.

The identities of both the female passenger and the driver were kept confidential, more for the passenger’s protection rather than the driver’s whose motives for coming on to his client is not only unwelcome but alarming.

Not only, according to the victim, did he touch her intimately; but the unnamed driver even called her up several times, texted her and even sent messages to her Messenger account.

It may be speculated that the driver was encouraged to pursue his aggressive behavior when the female passenger, tired as she was, agreed to give him her number, and when she didn’t protest his advances towards her.

Only when his attention was called by the Land Transportation Franchising and Regulatory Board (LTFRB) did the driver claim that he was merely trying to comfort his passenger who supposedly looked distressed at the time.

If by “comforting” the driver meant, as narrated by his victim, touching her intimately and even kissing her, then he must have done quite a satisfactory job for himself.

The company that contracted him, Grab Philippines, immediately took swift action by deactivating him from the service and bringing him and his operator to the LTFRB for action.

We doubt that this will discourage other drivers from committing more lascivious acts especially if the LTFRB doesn’t enforce sanctions that would ensure that such behavior won’t be allowed to prosper.

Fortunately for the female passenger, a legal group committed to pursuing passenger welfare extended legal assistance to her should she require it.

And she will need it because the LTFRB will hold a series of hearings to determine if the driver is guilty of the offense, and what sanctions will eventually be imposed on him.

While being friendly and courteous to passengers is expected from drivers, even they know the basics of good manners and right conduct (GMRC) that include among others a respect for one’s privacy and space.

We hope the female passenger makes good on her case and see to it that the driver be made to fully account for his abusive behavior towards her.

Grab, Uber and other TNVS drivers are assumed to be more well off, yet public expectations of their behavior are the same as those for public utility vehicle (PUV) drivers — basic courtesy to paying customers.

Read Next
Chinese and Muslim settlements in pre-colonial Cebu?