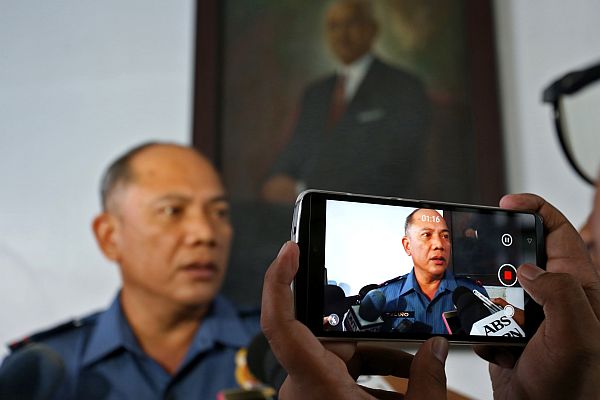 POLICE in Central Visayas remained on heightened alert amidst the continuing crisis in Marawi City.

Chief Supt. Noli Taliño, head of the Police Regional Office (PRO-7), assured that law enforcers are ready should the conflict in Marawi spill over to Cebu.

“That’s what we are monitoring, the possibility of a spillover. But so far, we have not monitored any movement or any reports of a possible threat in the region,” Taliño said in a press conference at the PRO-7 headquarters yesterday.

Taliño said security measures are well in place as the police and the military are working hand in hand in securing entry points.

“We are closely monitoring the situation in Marawi. While we are on full alert, we are also advising the public to stay vigilant,” Taliño said.

When on a full alert, policemen are not allowed to take leaves of absence unless in emergency situations, Taliño said One way of thwarting possible terror attacks is making sure that the police are working closely with the various Muslim communities, he said.

“Our Muslim brothers are very cooperative. The instruction to the city and provincial directors is to engage dialogs with our Muslim brothers as well as the other stakeholders in our efforts to maintain peace and order. We need their support,” said Taliño.

Taliño said the Salaam Police Centers in every police station are actively functioning.

“They are the ones who have direct contact with our Muslim brothers,” said Taliño.

Among the functions of the Salaam Police Center is to “undertake close monitoring, networking and liaising activities with Muslim communities in addressing terrorism and lawless violence in their respective areas to ensure respect of cultural diversity and cooperation.”

Meanwhile, even as the focus is more on ensuring peace, the police are also intensifying its anti-illegal drug campaign.

Taliño revealed that the “Double Barrel Reloaded” yielded significant achievements compared to the two versions of the government’s “war on drugs.”

In the “Double Barrel” campaign, which covered the period July 1 to October 25, 2016, a total of 1,441 operations were conducted in Central Visayas which led to the arrest of 2,926 persons.

In the same period, 118 persons were killed in police operations, 76,688 surrendered while a total of 144,544 houses were visited.

The “Double Barrel” was then replaced by the “Double Barrel Alpha,” which was eventually suspended after it was marred by some controversies involving some anti-narcotics operatives.

The “Double Barrel Alpha” covered the period October 26, 2016 to January 30, 2017 where the 1,597 operations resulted to the arrest of 2,439 persons. Thirty-nine people also died in police operations.

During the same period, 639,688 houses were visited while 29,871 drug suspects surrendered.

From March 1 to June 13 this year, the “Double Barrel: Reloaded” yielded 3,267 arrests. Nineteen people died from the 1,939 operations conducted while a total of 1,471 surrenderees were recorded and 171,791 houses were visited.