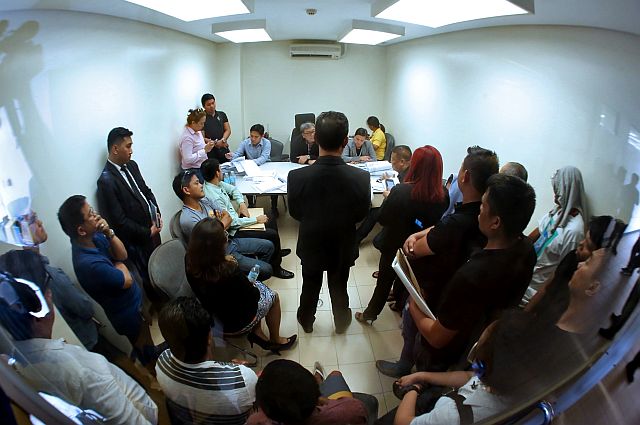 Some of the co-respondents of Bohol Provincial Board Member Niño Rey Boniel have been endorsed as state witnesses by the police. Defense lawyers are accusing the police of teaching their witnesses what to say to pin down Niño in the killing of his wife Gisela, the incumbent mayor of Bien Unido town in Bohol. (CDN PHOTO/JUNJIE MENDOZA)

Lawyers of Bohol Provincial Board Member Niño Rey Boniel are accusing the police of coaching two witnesses to implicate their client in the killing of his wife, Bien Unido town Mayor Gisela Boniel.

They are seeking the assistance of the Commission on Human Rights (CHR) to help them stop the police from allegedly teaching two witnesses what to say in order to pin down their client.

“The witnesses were taught what to testify on. They are influenced by the police,” said lawyer Gerardo Carillo in an interview after he spoke to Niño at the Fuente Police Station stockade on Saturday afternoon.

Senior Supt. Jonathan Cabal, head of the Regional Intelligence Group, said they welcome any plans of Niño’s lawyers to seek the intervention of the CHR.

“They can do whatever they want. The witnesses have been very spontaneous in their testimonies. No one ever coached them. If the police taught them anything, that is to be truthful,” he told Cebu Daily News over the phone yesterday.

Carillo said they will also ask the CHR to help them transfer the custody of Niño’s cousin Riolito Boniel and driver Randel Lupas from the Regional Special Operations Group inside the Police Regional Office in Central Visayas’ headquarters to another police unit where the defense lawyers can “freely” talk to them.

Riolito and Lupas have been endorsed by the police as state witnesses after they pointed Niño as the one who killed Gisela and threw the body into the water between Bien Unido in Bohol and Caubian Island in Lapu-Lapu City last June 7.

Riolito earlier claimed he operated the boat used to transport Gisela’s body. He said Niño shot Gisela in the head, tied a rock weighing 30 kilos around the mayor’s body, and threw it into the sea.

“All we are asking from the police is to be fair in this case. We are asking them not to do anything extralegal in extracting confessions from the witnesses,” Carillo said.

A complaint for parricide was filed last Tuesday against Niño at the Lapu-Lapu City Prosecutor’s Office for allegedly killing his wife last June 7.

Of the eight, only four were arrested with Niño: Riolito, Lupas, Willy Hoylar and Magoncia. The rest remain at large.

The search for Gisela’s body continued on Saturday but divers still did not get any positive results.

Carillo said they will ask the Lapu-Lapu City Prosecutor’s Office to closely consider all aspects of the case.

Without the dead body of Gisela, he said there is no proof that the Bien Unido mayor is dead.

“There is a possibility that she is still alive. In fact, we have proof that she (talked to someone) on the phone 18 hours after she was reported to have died,” Carillo said.

Also, he said the gun which was believed to be used in the crime remains missing.

“How can they (police) prove the fact of death? We are preparing our counter-affidavit and I hope the prosecutors in Lapu-Lapu City will heavily consider what we are presenting,” said Carillo who was accompanied by two other defense lawyers Handel Lagunay and Inocencio De La Cerna Jr.

De La Cerna is the legal counsel of Lubo Boniel, one of the respondents who remains at large.

Last Friday, policemen raided the house of Niño in Monterrazas subdivision in Barangay Guadalupe, Cebu City.
However, they did not find any gun.

Another witness is Gisela’s best friend, Angela Gamalinda-Leyson, who, along with her 17-year-old son was held captive inside the Bien Unido Double Barrier Reef Dive Camp before they were released last June 7.

Disgusted by Carillo’s accusations, Cabal said Niño’s lawyers are moving heaven and earth to discredit the witnesses to increase their attorney’s fees.

Cabal laughed at Carillo’s claim that Gisela might still be alive.

“If that is true, we couldn’t be happier. And if they have information of Mayor Gisela’s living body, why on earth are they not producing her? Their client is starting to rot in jail,” Cabal added.

He said the police have the same information gathered by Niño’s lawyers that Gisela purportedly talked to a friend on the phone 18 hours after she was reportedly killed.

In a June 11 report of The Bohol Chronicle, its lifestyle writer Raul Gatal said he tried to contact Gisela at around 10:17 p.m. on June 7 or 18 hours after she was allegedly shot and thrown into the sea.

Gatal, a friend of the victim, said Gisela answered her phone and merely said “Ok lang. We will just talk.”

That was the only response Gatal got.

“She did not answer on the first ring. But, on the second call I made a few seconds later, I heard her voice,” he said in an article on the Bohol Chronicles.

“I asked ‘Kumusta ka? I heard the news,’ and I capped the brief talk telling her ‘I’m just a text away for any help we can do,” he said.

Cabal, however, said claims that Gisela answered her phone is unbelievable. He said various closed-circuit television (CCTV) footage recovered by the police showed that Niño got Gisela’s bag and cellular phones after the board member allegedly killed the victim.

“The defense lawyers are concocting claims. All the cell phones of mayora (Gisela) were taken by Niño,” Cabal said.

“From the time he arrived in Punta Engaño to the time he left the port of Cebu for Bohol, we have the CCTV footages. And he was captured bringing mayora’s bag,” he said.

In an interview after he celebrated Mass at the Our Lady of the Sacred Heart Parish in Cebu City, the 67-year-old prelate said he was saddened by the tragic death of Gisela who reportedly had an earlier spat with Niño over financial matters and jealousy.

“These are sad and unfortunate events. This should not have happened. We can only pray for the soul of the departed and the family and wish that authorities will find a way to exact justice for the sake of the family,” he said when asked by reporters on Saturday to comment about the recent crime.

“We’ve always taught about love and care for the family. As we lament the unfortunate fate of couples who experience this kind of crime, we pray that families will draw closer to the Lord and ask God for blessing and guidance,” he said.