By the end of the year, all port entry transactions should  be posted online  in the website of the Bureau of Customs (BOC) to promote transparency.

In his first visit at the Port of Cebu yesterday, newly appointed Customs Commissioner John Philippe Sevilla said this is one of the reforms he is pursuing.

“There will be a committed increase of transparency within the bureau. I want more information posted so that people will understand that we do not want to hide anything,” he said.

He said data should be posted online monthly to include goods that are being imported and how much duties and taxes are paid although names of importers will not be posted.

This will require improving  the bureau’s  Information Technology (IT) system and internal data gathering, he said. Sevilla said the bureau still uses manual processing, which explains the lack of systemized data collection.

The “full computerization” of the bureau was initiated by former Commissioner Ruffy Biazon, building on an earlier project started in 2009 with the aim of eliminating paperwork and fixers, for a faster corruption-free process.

In order to fight smuggling, processes have to be systematized, Sevilla said.

“Our system is not good enough. We can’t monitor the problem if we don’t have systemized process,” he explained.

He said  he will also require close monitoring of  old customs-bonded warehouses.

“Some old warehouses have complex issues and are difficult to monitor. And if we can’t monitor, a lot of things will happen that we can’t find out,” Sevilla added.

Cebu was the first port outside of Manila that Sevilla visited as part of a swing through the Visayas and Mindanao.

The Port of Cebu is the biggest in the Visayas  and accounts for 80 percent of all shipping activity.

Eliminating smuggling is important, he said, not just to improve collections but to protect local farmers from the negative impact of unhampered entry of cheap imported agricultural  products.

“Revenue is only our second concern. We should not forget the harm that it causes to our local farmers,” Sevilla added. “Smuggling is a nationwide problem. Smugglers are not stupid.

They go somewhere else (when the heat is on),” he said. 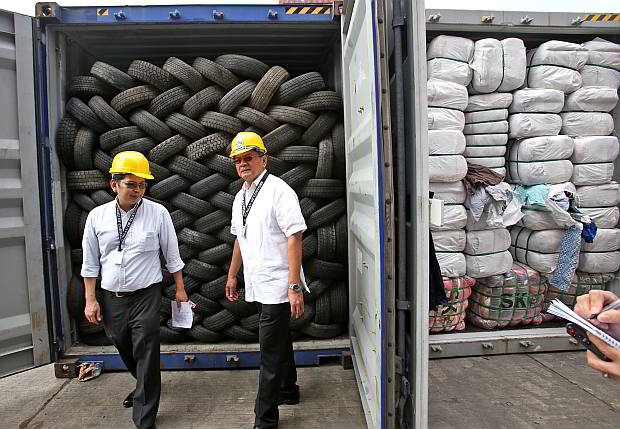 Meanwhile, Sevilla inspected impounded vans, part of the 1,360 container vans that were declared  abandoned in 2013 after arrival in Cebu.

Inside some vans were used tires from Japan, used clothing or “ukay-ukay” from Korea, dismantled car parts and small rocks used for water purification. The smuggled tires and dismantled cars will be destroyed and properly disposed, he said.

Used clothing may be donated to the Department of Social Welfare and Development (DSWD) for calamity victims after undergoing a legal process.

“If there is rice among the items  in the container vans, it will be evaluated for public auction,” Sevilla added.

Cargoes left unclaimed by consignees 30 days after arrival or those held in port with no permits and documents are subjected to abandonment proceedings before they are declared government’s property.

The identities of consignees of the abandoned container vans are still being investigated.

One of the claimants filed a petition for injunction in court against the Bureau of Customs (BOC) – Port of Cebu, saying that his purchased cargo of rice worth P338 million was held due to failure to present import permits.

Edgardo Cristobal of Manishaft Trading is demanding the release of 451 container vans of rice purchased from Starcraft International and Silent Royal Marketing. Each van contains 520 sacks of rice.

The vans arrived in various shipments from September 27 to October 31, 2013. Holganza cited customs rules about unclaimed container vans  that will undergo abandonment proceedings.

In Friday’s hearing before Branch 12 of the Cebu Regional Trial Court, both parties were ordered to submit their memorandums to the judge on Wednesday.