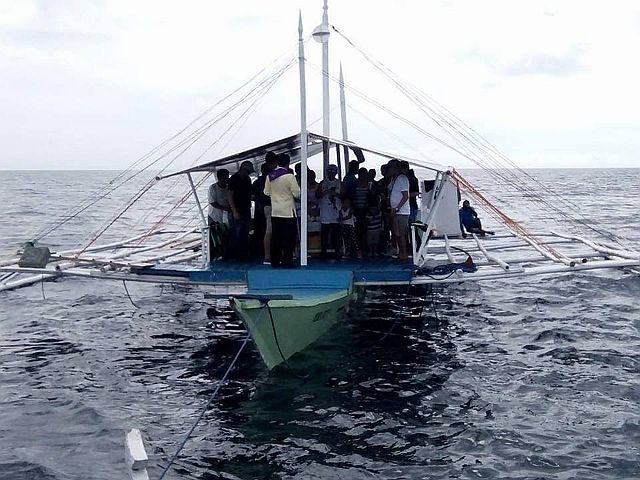 Rev. Edward Flora (above, back to camera) officiates the memorial service for missing Bien Unido Mayor Gisela Bendong-Boniel atteded by the mayor’s friends, who ended the service with the offering of flowers for the mayor’s soul.
CDN PHOTO/FE MARIE DUMABOC

Friends who consider themselves family of Gisela held a memorial service and a spiritual activity at the area where Bien Unido Mayor Gisela Bendong-Boniel was reportedly thrown at sea off the waters of Caubian Island in Lapu-Lapu City.

“We are Gisela’s friends, and we consider ourselves as her family. We do this as prayers for her soul and own goodness, but this does not mean that we are giving up. We are still hopeful to find her body. We will do whatever we can,” said Angela Gamalinda-Leyson, Mayor Boniel’s best friend, who also attended Saturday’s 9 a.m. memorial service officiated by Rev. Edward Flora of the United Church of Christ of the Philippines (UCCP), of which some of Gisela’s friends present were members.

The prayer service lasted for at least 15 minutes, after which Gisela’s friends threw chrysanthemums at sea as offerings for Gisela’s soul.

After the memorial service, a spiritual activity was also held with spirit warriors Bro. Mario Millanes and his companion, whom he described as a cotada or the medium where the soul of Gisela could enter and talk to him.

Leyson said that they were doing everything they could to find and retrieve Gisela’s body, including doing this spiritual activity done by spirit warriors.

Millanes during the spiritual activity claimed that he spoke with Gisela through the medium, claiming that Gisela’s soul had not yet accepted her death.

Millanes also claimed that Gisela was allegedly thrown at sea as an offering to an evil spirit, whom Millanes claimed allegedly was holding Gisela’s soul.

He said this was the reason Gisela’s body could not be found.

During the spiritual activity, Millanes also claimed to have fought with the evil spirit, whom he allegedly told to free Gisela’s soul.

He later said that with God’s blessing, Gisela’s body would hopefully be released and found soon.

Millanes said that the spiritual activity that they performed included the releasing and deliverance of souls, healing of the family and exorcism.

The memorial service and spiritual activity were witnessed by 67 friends including AirAsia employees and volunteer divers and 10 police officers, who were on two pump boats.

Gisela was once an AirAsia pilot before she became a mayor.

The service and spiritual activity were done as the body of Gisela remains missing three weeks into the search and retrieval operations conducted by the police.

Senior Supt. Jonathan Cabal, Regional Intelligence Division (RID-7) chief, and witnesses Reolito “Etad” Boniel and Edgar Tapere were also present during the service, including the offering of white chrysanthemum flowers, which were thrown at sea.

Cabal said the search and retrieval operations for Gisela’s body would resume tomorrow, July 3, and would last for a week.

Reolito, who earlier admitted to have participated in the crime, said he apologized to Gisela for not being able to do something to save her from Bohol Provincial Board Member Niño Rey Boniel, who is accused of killing her.

Reolito and three other suspects were indicted for murder by the Lapu-Lapu City Prosecutor’s Office for conniving with Niño in killing Gisela.

Reolito said he was requested by Niño to operate the pump boat that was used in transporting Gisela’s body to the sea.

While they were in between Bohol and Cebu, Reolito said Niño shot Gisela in the head and then threw her body, which was tied with a 30-kilo rock, to the sea.

Reolito and Niño’s driver Randel Lupas were endorsed to the Department of Justice as state witnesses by the police.

Niño earlier claimed that Gisela is alive and is just hiding due to numerous debts.

But Gisela’s best friend Leyson challenged Niño to show proof that the Gisela is alive.

“I challenge you to prove that she (Gisela) is not dead,” said Leyson, who claimed to have been there when Gisela was taken by her husband.

Leyson, who was with Gisela when she was taken, claimed that she saw Nino punch Gisela before losing consciousness after a taser was allegedly used on her.