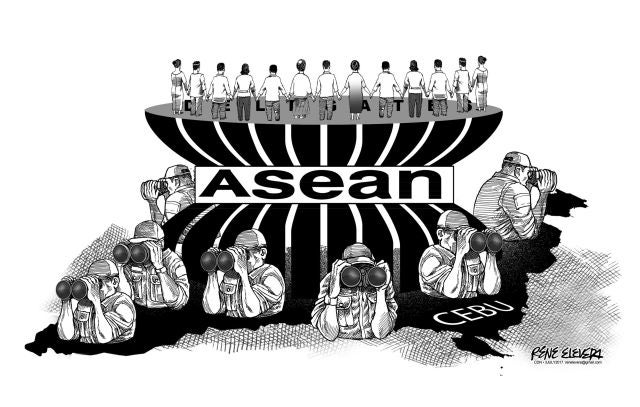 We hope nothing untoward had happened during last Saturday’s scheduled start of another round of meetings held by 300 foreign officials for the Association of Southeast Asian Nations (Asean).

But then again, tight security and rerouting had been in effect since last Wednesday in Cebu City where the officials are scheduled to meet until Friday this week.

It’s just that since the failed Bohol misadventure of the Abu Sayyaf bandit group, the country thought it had experienced some breather of sorts from criminal and terrorist activity. And then the Maute terror group crept into Marawi City and laid siege there.

With government troops shelling Marawi City and the armed forces declaring last Tuesday that they target to finish the Maute Group siege in a week or two, there is bound to be some movement of the terrorists out of Marawi City and into areas where they can blend in unnoticed until their next terrorist attack.

Which is why resorts along coastlines or situated on islands are of special concern since they can be reached by pump boat again as shown by the Abu Sayyaf’s botched Bohol misadventure.

The Maute terrorist group has considerable firepower and funding sourced from illegal drugs as claimed by the Duterte administration, so buying motorized pump boats shouldn’t be too hard for them.

Unless they have more than enough funding to buy their own helicopters or small planes that are detectable by radar, it is expected that these terrorists will travel by land or sea, so port areas should have checkpoints to inspect people coming in and going out.

We hope these resorts, which are frequented by tourists, would heed the advice of Vice Gov. Agnes Magpale and beef up their security measures for the duration of the Asean summit meetings.

The same goes without saying to the hotel where the meetings will be held and its surrounding areas, where a security perimeter had been set up. Last we heard, passenger jeepneys, vehicles and buses won’t have to undergo rerouting for the duration of the meetings.

We hope the traffic officials are right on this because the 2015 Asean meetings had caused traffic congestion that had inconvenienced the general public.

We hope that as we keep our eyes peeled and our ears open for any terrorist attack, the delegates would remain safe and, due to the damage wrought on our image by the Marawi City siege, leave with a more favorable impression of our country as being safe for other foreigners like them to visit and stay in.

Read Next
Way to go!