New Boss on the Block 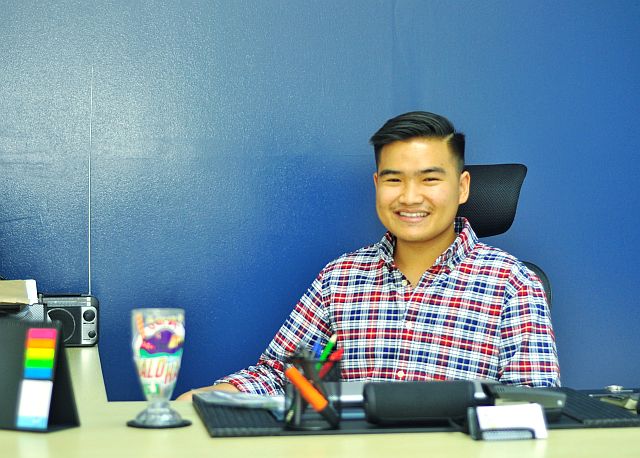 IT’S EASY to assume that those who are on top of the corporate game, having the same last name as the owner, have it easier than the rest—without the hassle of proving their worth.

Vicente Eduardo del Rosario is bent on dismissing this impression.

The grandchild of Viva Entertainment founder Vicente del Rosario, Vicente —or simply Verb —wasn’t spared from criticism when he took on the position of Vice President for Operations of Viva South.

Aside from leading Viva South in its dream to create quality localized entertainment, at par with Manila’s, he is also confronted with his own “horrors”—of thinking that everyone is expecting him to fail.

“I don’t want them to think that I’m here only because of my name,” he said in an interview at his Viva South office.

If there’s one thing we learned at that meeting, it’s that 25-year-old Verb is courage personified.Having worked in the stock market, he likes taking risks, placing bets despite the unpredictability of the market. For him, uncertaintyis part of the thrill.

In the same spririt, he accepted the job in Cebu, starting from scratch —not knowing the language and the culture—but buoyed by the intention of developing and giving opportunities to homegrown talents in Visayas and Mindanao.

More than that, we also learned a few more things about Verb.

For one, the guy loves numbers so much that a subject matter would segue into another topic, involving numbers, like investments or the estimated population of Visayas-Mindanao, that is interestingly bigger than the number of people livingin the neighboring countries.

We also discovered his “weakness” —posing for the camera or identifying his favorite songs, off the top of his head.

Definitely, there’s more to Verb than his being a del Rosario.

What’s it like to hold a high position at the age of 25?
First, it’s very overwhelming. Being in a position like mine, parang everyone around you is just expecting you to fail para masabi nila
na ganun. Nature kasi ‘yan ng maraming tao, you want to pull others down, lalo na at apo ako ng owner, and perhaps everyone is thinking that you are not deserving.

It’s very daunting task. But at the end of the day, you just prevail and try to prove everyone wrong.

How do you deal with such negativity?

I am the type who would rather focus on myself other than what other people think about me. Those who are expecting me to fail, di ko sila pinapansin, more on just self-improvement and learning things day by day. Kasi those people who are expecting you to fail, marami silang mabibigay sa ‘yo lalo na tips kasi matagal na sila sa industry. You just focus on your goal and do your best. I just love what I do so I continue this, day by day.

How was the offer to lead the Viva South given to you and what was the first thing on your mind?

I remember it well. We were in a restaurant. Every Monday, we do a family meeting over lunch. I was still a broker, stock trader then. I was thinking of furthering my studies but I couldn’t because I needed managerial experience. One family lunch, Boss Vic (del Rosario) randomly asked me if I was okay with Cebu. Gulat ako, syempre kasi sobrang nakakatakot because it is such a big responsibility. It’s not just about Cebu but the whole Visayas and Mindanao.

Unang-unang wala akong kakilala dito, di ko alam yung lenggwaheat kultura, so I have to start from zero. I was really surprised, but the competitive side of me started kicking in, so I wanted to try and see what happens. We’ll never know, so ayun.

How was the transition from living in Manila to Cebu?

Hirap siya kasi I grew up with my family. I grew up with people taking care of everything for me. The usual na paggising mo may pagkain na nakahanda, ‘yung basics kumbaga. Pagkaligo mo, tapos na ang labada.

Are you living alone?

How about the transition from being a broker to being in the entertainment industry?

For me it’s the love for two things. ‘Yung dream ko talaga when I was a kid, before entering entertainment as I also love what we do, I wanted to fulfill my dream of being a stock trader or stock broker. Kaya nga ako nag economics, kaya rin ako nag-apply sa maraming bangko and eventually nag-aral ng stocks.

What do you love most about being a broker?

How similar or different are your past and present jobs?

Sa stock market kasi, it humbles you. Pag mali ka, mali ka talaga. You are against billions and billions of pesos, ‘yung kunting millions mo is like a drop in the bucket of the whole market.

So if you bet wrong, it’s wrong, di na pwedepilitin. I guess sa profession ko right now, we have to be humble lalo na at we are still starting. Technical-wise, wala talaga akong alam—sa production at color grading at ano ba ang tamang timpla ng vocals… so I guess being humble.

How are you as a boss?

As much as possible, I try to be friends with my employees kasi I’m sure naiisip nila na bata pa ako at siguro walang alam. So friendly lang, I think that’s how most millennials work around with people, try to be friendly and kind as much as possible. At the end of the day, mahirap mang-away when everyone’s expecting you to fail, mahirap na wala kang kakampi. With me, hirap i-separate ‘yung work sa personal life.

Like sila Mang Boy, even with non-work stuff, I consult him, like how to fix the TV. Mang Boy is an employee of Viva for the past 50 years.
Being a grandchild of Boss Vic, is there pressure for you to take on one of the important positions of the company?

Wala naman, I think we were never pressured. It was set up by Boss Vic not as a family business but rather just a business. I have cousins who chose a career far from entertainment business. We were never told to be involved. For us who are working under him, I think we are just inspired by how much Boss Vic loves the business.
Being the head for Viva South, how do you see Cebu as an entertainment hub?

But have you heard about Binisaya Festival though?

Yes, I am currently in talks with the director right now, with Ara (Chawdhury). We are planning something. Sana.
What about the music scene of Cebu?

Siguro music-wise everyone is offering very good songs but what Viva can offer is the streamlining of the structure in the industry. Being in the
entertainment industry for the past 50 years, we already know what do. Perhaps, it is commercializing the appeal of a Bisaya music as a whole and not just producing good music kasi producing good music is just one aspect of it. You have to market it, paano mo siya ilalabas sa radyo. And how do you make the artist transcend from musical-wise to being an artist. We are giving the whole entertainment package with localized content.

Do you have plans of going into TV?

Napag-isipan to create a VisMin network, but we want to start with music first and roll things out slowly. And TV is a very big investment for us, but we will see.

Name three characteristics that of yours that will inspire other people, especially your fellow millennials?

And lastly, follow through. Kasi ako, ang daming days na I question myself if there is anything happening to the radio and the production, and I asked myself if it’s the right path. Pero itulog mo lang yun, ako lang mag-isa, wala akong ma-share-ran ng feelings, malabasan ng saloobin, tulog nalang talaga. The next day, tuloy mo pa din. Just follow through. It’s not the prettiest but you have to believe that there is light at the end of the tunnel, ika nga.

How do you describe a great boss?
A great leader would not be insecure to ask and seek help. Even Boss Vic—he did not even know a thing about music production noon, but
‘di siya insecure na mag-hire ng magaling na producer, magaling na songwriter. At the end of the day, dapat ‘di ka insecure to delegate tasks to your people, dapat marunong kang mag-trust sa roles nila, di ka naman magha-hire kung di mo siya mata-trust.

What do you consider the most common misconception about millennials?

How do you see yourself five or ten years from now?

Hopefully, hindi ako maging kasing taba nila, joke lang (laughs). At least, meron ng following ang Visayan content, that is really the dream. Though I am not a Bisaya, I saw the passion of the people here —the passion of the singers and composers, na mabuhay in terms of music. Mahirap magpakain through songs, it’s not every day you get gigs. It’s the same passion I see nila Ara with the Binisaya, at least magkaroon siya ng following, at least ma-recognize ng Manila na may magandang content sa South.

If you think about it, Visayas and Mindanao ang needs niyo is very under-served in terms of entertainment, ang nagdidikta is Manila, bakit ganun? You have 40 million people here, it’s eight times bigger than Singapore, six times of Hong Kong, and almost twice of Australia, and we are even bigger than Malaysia. It’s like we are our own country, dapat may sarili din tayong industry.