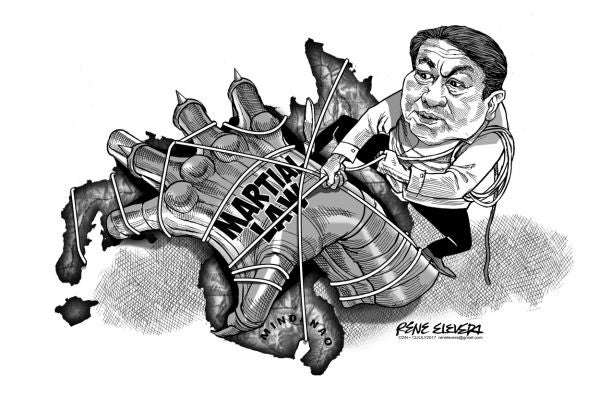 House Speaker Pantaleon Alvarez is quite the rabid ally of President Rodrigo Duterte that he wanted a five-year extension of the enforcement of martial law in Mindanao.

The House speaker declared his opinion amid a counter assessment by the military that a five-year martial law period in Mindanao is “too long” and they need “an intelligent basis” to recommend whether or not to extend martial law and for how long.

Brig. Gen. Restituto Padilla, AFP spokesman, questioned Alvarez’s basis for extending martial law in Mindanao until the end of President Duterte’s term, and we join the public in asking the House speaker’s capability of making that rash armchair assessment given that he isn’t in the frontline of the Marawi City siege.

Like those who opposed the martial law declaration in Mindanao due to the Marawi City siege, elected and appointed public officials should at least touch base with the families, the soldiers and other affected stakeholders who have spent time in the trenches and know exactly what repercussions of extending martial law in Mindanao would entail.

That said, even if Alvarez qualified his proposal by saying it was merely an opinion, his position in Congress carries weight since it may reflect the President’s mind-set and attitude toward Marawi City in particular and Mindanao in general.

The extension of martial law in Mindanao has serious repercussions for Cebu and other provinces where the hundreds of thousands of Marawi City residents moved in following the start of the Marawi City siege.

As per latest report, Marawi City Hall is said to be open for business, but one can never guess that the situation there had stabilized based on videos of Maute terrorists laughing and relaxing prior to engaging the government troops in combat.

The government troops have sustained quite a number of losses, and while elsewhere around the world where countries like Iraq claimed to have broken the back of ISIS militants, the terror group had shown some resilience and even incited like-minded terror groups like the Maute to forcibly pillage cities like Marawi.

While the military’s disclosure of information may be restricted in order not to feed the social media–savvy Maute terrorists, it should be honest enough — it is hoped they are, though a lot of us think otherwise — to admit whether a five-year martial law period in Mindanao is absolutely essential at this time or in the near future.

Those who strongly oppose extending martial law in Mindanao are right in saying it would make the Philippines and its government appear weak and incapable in the eyes of the world.

By extending martial law in Mindanao for five years, it sends the wrong signals to tourists and investors that the government cannot contain the terror threat without locking down an entire island and possibly extending it to the entire country.