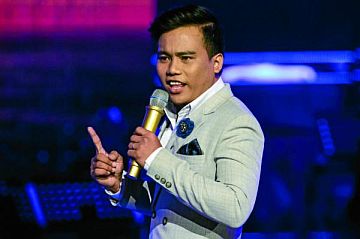 Accompanied by her family and friends, the victim (name withheld by Cebu Daily News) filed the case at around 3:00 p.m. yesterday. She refused to issue a statement to media.

Belleza, who is said to be the son of a farmer who had dreamed of becoming a well-known singer one day, won the Abs-Cbn talent search “Tawag ng Tanghalan” aired on the network’s noontime show, Showtime.

Last Sunday, Belleza performed as guest in the comedy concert of one of the noontime show’s hosts at the IEC Pavilion in Barangay Mabolo.
He was arrested by operatives of Mabolo Police Station after the concert.

According to PO1 Ma. Theresa Talisic of the Women and Children’s Protection Desk, the victim alleged that the incident occurred at around 2:00 p.m. last Saturday at a condominium in Barangay Lahug, where Belleza was staying.

The victim also claimed that she was hurt by the suspect during the incident when she tried to stop him from molesting her.
The girl’s parents had told police that they will not agree to settle the case.

Cebu City Assistant Prosecutor Ma. Theresa Casiño, said that the inquest proceeding was still underway as Belleza, who had complained of chest pains, is now under hospital arrest.

According to Casiño, she may decide to visit Belleza to conduct inquest proceedings at the hospital or wait for the medical bulletin on his health.

Assuring that justice will be served, Casiño said that prosecutors will also look into reports whether or not Belleza was given special treatment by the police.