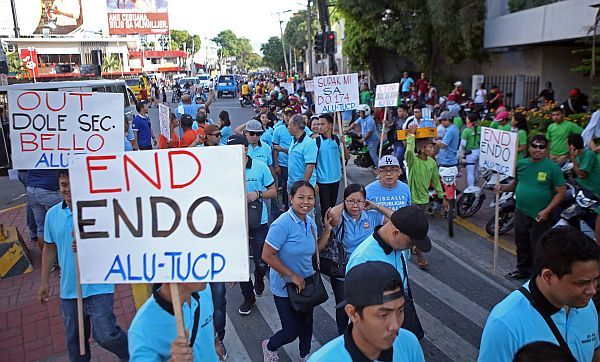 Labor groups rally against endo in this May 2, 2017 file photo

AN estimated 200 members of militant labor groups marched from Fuente Rotunda to the regional Department of Labor and Employment (DOLE-7) to register anew their protest against contractualization in the country.

The militants first visited the regional National Labor Relations Commission (NLRC-7) Arbitration Branch to file cases in behalf of workers who were terminated despite being regularized based on the assessment conducted by DOLE-7.

Jaime Paglinawan of the regional chapter of the Kilusang Mayo Uno (KMU) said they marched to the DOLE-7 office at noon to hold a rally. The rally ended with a candle-lighting activity.

He said they are reiterating their demand that Labor Secretary Silvestro Bello III should abolish Department Order (DO) 174 on contracting and subcontracting workers and end all forms of contractualization.

Paglinawan said their group is also demanding a P750 daily minimum wage across the country and fast-track the resolution of labor disputes.
He also said they want labor group members to be appointed labor inspectors.

But DOLE-7 Acting Regional Director Cyril Ticao said their office already implemented DO 174 to end fly-by-night contractors and manpower services and to strengthen their campaign against end of contract or endo arrangements.

DO 174 also required higher capital and registration fees for contractors and agencies.

“There were a lot of workers who were regularized, but the others have their cases under appeal in Manila,” Ticao said.