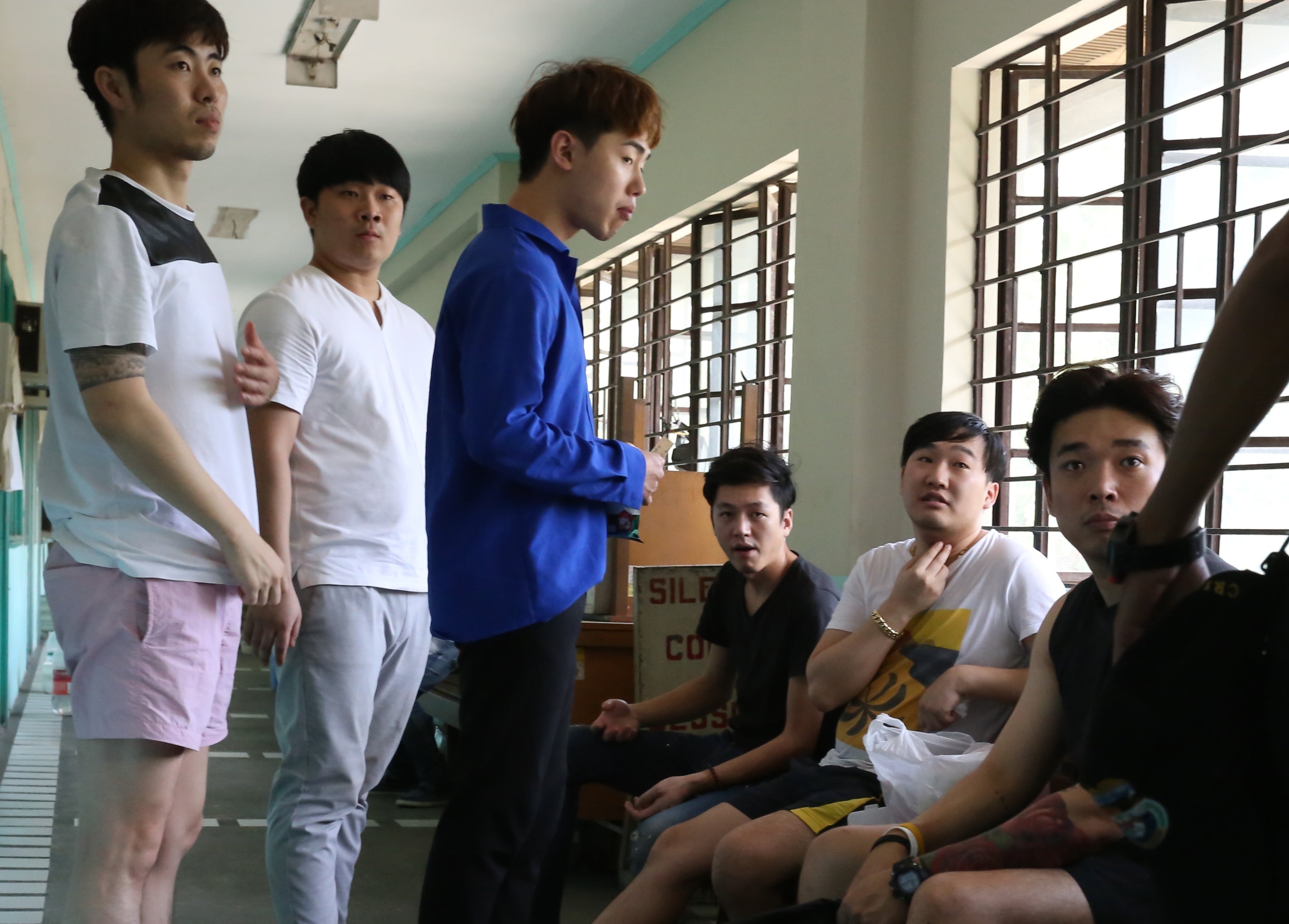 Only six of the 13 Korean nationals arrested for for illegal online gambling were charged before the Mandaue City Prosecutor’s Office. The others, who were sleeping when the raiding team arrived, were brought to the Bureau of Immigration to verify the legality of their stay in the country.
(CDN PHOTO/JUNJIE MENDOZA)

The National Bureau of Investigation (NBI-7) arrested 13 Koreans who put up and manned an online gambling portal, based in Mandaue City last Wednesday night.

However, only six of them have been charged before the Mandaue City Prosecutor’s Office for cyber crimes in relation to illegal gambling.

According to NBI Special Investigator Arnel Pura, the other seven Koreans were asleep inside the two-storey townhouse the Koreans rented in Barangay Cabancalan, Mandaue City, when the NBI team conducted the raid.

“We only made the arrest on the six because they were caught in the act. When we entered the house, we saw them managing the operations of their illegal online gambling on their respective computer units. Due process mandates us not to file complaints on the rest because they were not seen actually committing the crimes,” he explained.

However, all of the 13 Korean suspects remain under the custody of the NBI–7 pending the resolution of the complaints by the Mandaue City Prosecution.

The NBI is also looking into the immigration records of the Koreans, if their stay in the country is legal.

The other seven were escorted by another group from NBI to the Bureau of Immigration to verify their visas.

However, Pura said all 13 suspects may face deportation.

“In the case of those who may stand trial in court, the judge can rule to have them deported since the crimes they committed, albeit bailable, serve as sufficient basis for such decision,” he said.

The other seven could also be deported back to South Korea if the immigration bureau determines that they are undocumented aliens doing business in the country.

“Otherwise, then they can be released. But they will be under close monitoring by law enforcers,” explained Pura.

The raiding team confiscated at least nine monitor screens, three central processing units (CPU), and several power supply boxes, which they concluded were used by the suspects in their illegal activities.

Receipts and bills from internet service providers, several mobile phones, and passports issued by the government in South Korea were also recovered from the townhouse.

Pura said the NBI received information about foreigners engaging in illegal online gambling last January 31. They were only able to verify the information last June 1 or four months later.

“And since June 1, our team had been closely monitoring the suspects’ activities. Tracing their location and proving their illegal activities had been a very difficult challenge since it was done online,” he added.

Pura said they have still to determine how much was earned by the Koreans from their online gambling, citing the tedious and complicated process to recover data and transactions done through digital media such as the internet.

Initial findings showed that the business was operated worldwide, with clients from South Korea, the Philippines, Australia and the United States.

Pura said the suspects facilitated an online gambling portal that allows bettors from different parts of the world to gamble through the internet, on the outcome of sports events, especially those held in South Korea.

“Bets and winnings are facilitated through the internet where bets are made through online banking, and the winnings are claimed from an offshore bank where bettors maintain a special account specifically for their gambling activities. Traces of their transactions such as withdrawing the money won are erased with the assistance of a gadget they call a One Time Passcode (OTP),” he added.

Pura also clarified that the only illegal aspect in the suspect’s activities was the absence of a license from the Philippine Amusement and Gaming Cooperation (PAGCOR), the state agency tasked to regulate gambling.

“Online gambling is legal as long as you are allowed and approved by the PAGCOR, that’s why you need to have a license from them. But filing and acquiring it is not an easy job. It cannot be done in an instant so I guess that’s why they opted to operate under the table,” Pura added.

The raid on the townhouse was based on a search warrant issued by Regional Trial Court Branch V presiding Judge Ricky Jones Macabaya.

The subjects of the warrant, Rhee Myun Dong and Randy Bernales, were not present when the raid took place last Wednesday. The warrant was then served to Kim Chi Min, one of the six suspects indicted.

Pura said none of the 13 Korean suspects resisted arrest. He said they are now tracing the whereabouts of Dong and Bernales.

Read Next
Owner of car involved in ‘road rage’ summoned