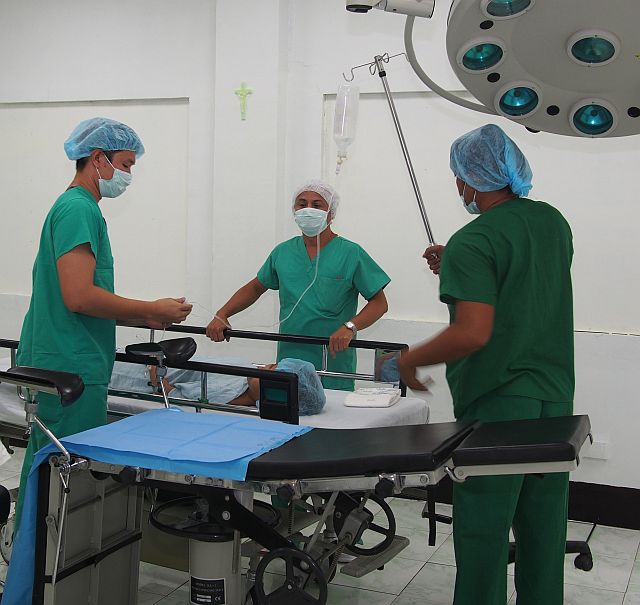 The two provincial hospitals being eyed for upgrade to 150-bed hospitals are the Cebu Provincial Hospitals in the cities of Danao and Carcar, both of which inaugurated their respective level 1 operating rooms, as shown in these photos taken in September 2014 (CDN FILE PHOTOS).

President Rodrigo Duterte has signed into law the bill increasing penalties for hospitals and medical clinics that will demand deposit as a condition before providing medical treatment or admitting patients in emergency or serious medical conditions.

Duterte signed on August 3 Republic Act. No. 10932 or “An Act Strengthening the Hospital Anti Deposit Law.”

The law amended Batas Pambansa Bilang 702, also known as “An Act Prohibiting the Demand of Deposits or Advance Payments for the Confinement or Treatment of Patients in Hospitals and Medical Clinics in Certain Cases.”

“In emergency or serious cases, it shall be unlawful … to request, solicit, demand, or accept any deposit or any other form of advance payment as prerequisite for administering basic emergency care to any patient,” the new law said.

The law stated that “any official, medical practitioner or employee of a hospital or medical clinic who violates the provision of this act shall, upon conviction by final judgment, be punished by imprisonment of not less than six months and one day but not more than two years and four months, or a fine of not less than P100,000, but not more than P300,000.00 or both at the discretion of the court.”

Under the new law, stricter penalties would be served to hospitals that would refuse treatment of emergency-case patients because of a lack of money.

Penalties now include imprisonment of up to four to six years for hospital officials who demand any deposit or other forms of advance payment as a prerequisite for admission or medical treatment of an emergency patient.

Fines have also been increased to reflect the strengthening of the regulation. Hospitals that refuse to provide emergency patients with basic care face penalties ranging from P100,000 to P1 million.

It also gives authority to the Department of Health (DOH) to revoke the license of a health facility after three repeated violations committed pursuant to an established policy of the hospital or clinic or upon the instruction of its management.

Three repeated violations from hospitals may also lead to the castigation of the facility’s license by the Department of Health (DOH).

Hospitals and clinics may only refuse patients “by reason of inadequacy of the medical capabilities.”

Attending physicians are allowed to transfer patients to another facility that can provide appropriate care only after necessary emergency treatment and support has been given to stabilize the patient, the law said.

No more reason to beg

Sen. Risa Hontiveros on Friday welcomed President Duterte’s signing of the bill she authored, raising penalties for hospitals refusing to treat patients in emergency cases who are unable to pay the deposits.

“I thank my fellow senators for supporting this law and the Executive branch for signing the measure before the expiry of the 30-day period given under the Constitution when the bill would have lapsed into law,” Hontiveros said in a statement.

The minority senator is the vice chairperson of the Senate committee on health.

The neophyte senator said the measure will end the “despicable practice of abusive hospitals that demand any deposit or other forms of advance payment as a prerequisite for admission or medical treatment of an emergency patient.”

“It is the duty of the State to provide adequate health care to its citizens. This law is a reflection of this duty and of our continued commitment to improve and provide sufficient health care to the sectors of society that need it the most. People who need emergency medical care can now be assured of stronger rights under the law,” Hontiveros said.

In Cebu, the new law will have no major impact on the operation of the University of Cebu Medical Center (UCMed), said UC President and Hospital Chairman Augusto Go.

Go said the new law would not effect any difference in their operation because they have long been implementing the no-deposit policy for emergency cases.

“The hospital is where you save lives. When there is an emergency, we treat the patients immediately without asking for payment,” he said in a phone interview with Cebu Daily News.

Seen to be a tertiary hospital with a 300-bed capacity, the Mandaue-based medical center was built to deliver top-quality clinical care as well as affordable and efficient patient-center services through its state-of-the art facilities and professional medical staff.

Go reserved further comments until he has read about the bill President Duterte signed into law. INQUIRER.NET AND REPORTER

Read Next
Leave early for airport and piers; stay away from IronMan routes