Leave early for airport and piers; stay away from IronMan routes 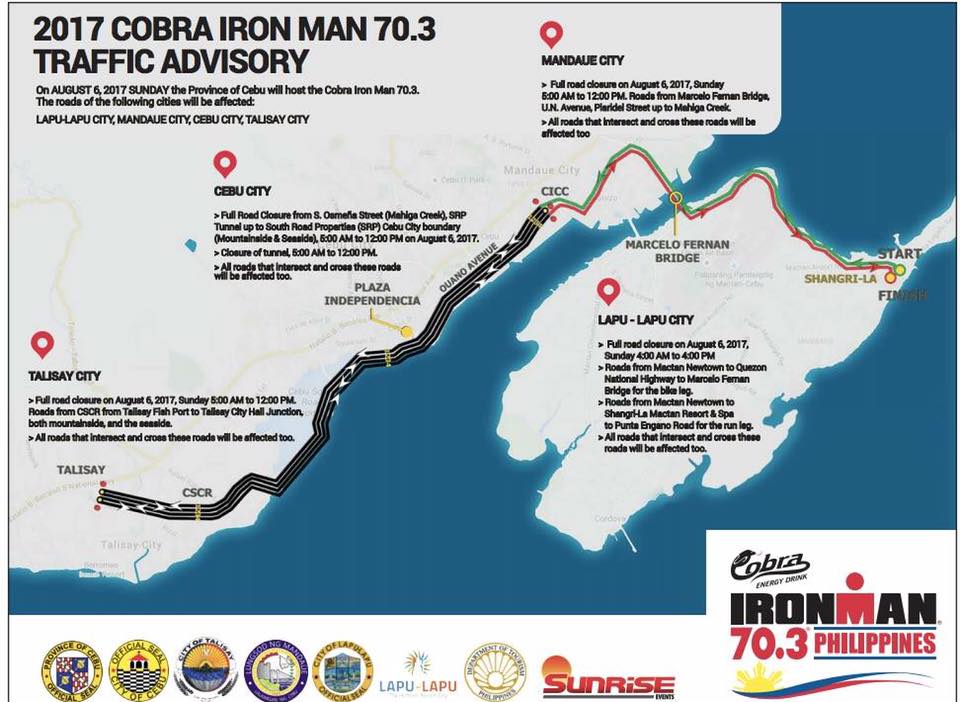 ARE you going out today?

Expect traffic in some parts of Cebu City as the Cebu City Transportation Office (CCTO) will close some roads in the city that will form part of the route of the international triathlon event Cobra IronMan 70.3 Philippines.

Francisco Ouano, operations chief of CCTO, said they will implement two-lane road closure along S. Osmeña Boulevard, which covers the road stretch from the boundary of the South Road Properties (SRP) to Cebu International Port (CIP). Within this stretch is Cebu City’s port areas.

“Closure will start at 5 a.m., and roads will be opened from 12 noon to 1 p.m. or depend(ing) on the last participant (who will pass by),” Ouano said in a phone interview.

This means that those heading for Cebu City’s port areas with morning travel schedules are advised to head out to the pier area prior to the road closure.

While S. Osmeña Boulevard is closed today, those who are traveling to and from the southern part of Cebu are advised to take alternative routes, or take the south national road in Barangay Mambaling going to Natalio Bacalso Avenue.

“If you don’t want to get caught up in the traffic, then you can travel after the race (beyond 1 p.m.),” Ouano added.

Spectators are advised to stay away from the routes to prevent accidents.

If you have a scheduled flight at the Mactan-Cebu International Airport (MCIA) in Lapu-Lapu City today, Glenn Antigua, the operations chief of Traffic Enforcement Agency of Mandaue (Team) advised the passengers to be at the airport at least two hours ahead of their scheduled flight.

Team will implement road closures at Demetrio M. Cortes (formerly known as Plaridel Street), A. Soriano Avenue, and in one lane of the Marcelo Fernan Bridge starting at 5 a.m. today.

The other lane of the Marcelo Fernan Bridge will be available for the commuters traveling to and from Mactan Island.

The road closures in Mandaue City, just like in Cebu City, will be lifted at 1 p.m. today, Antigua said.

Passengers can take the the Sotero Cabahug Road and M.C Briones Highway in going to MCIA.

Despite the scheduled Cobra IronMan 70.3 Philippines race today, Antigua said that traffic might not be very heavy in Mandaue City because aside from it being a Sunday, today is also a non-working holiday in cities and towns under Cebu province to commemorate the 448th founding anniversary of the province of Cebu.