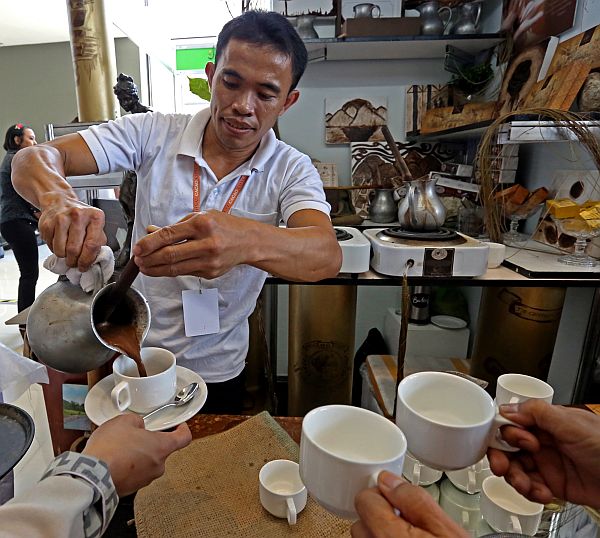 Considered among the country’s poorest, coconut farmers now have the opportunity to improve their earnings by going into cacao and coffee intercropping, Sen. Cynthia Villar said Tuesday.

Coconut farmers earn around of P1,500 monthly, which is way below the subsistence income of P6,300 for a family of five, noted Villar, who chairs the Senate committees on agriculture, food, environment and natural resources, and agrarian reform.

“Malayo ang aakyatin nila (they have a long way to go before they can reach subsistence income). We believe that by doing intercropping (the farmers can increase their income),” she said during a press conference held in Tuesday.

The senator was among the speakers at the opening day of the two-day National Cacao Congress held in Cebu Tuesday.

Farmers can earn as much as P100,000 per hectare per year if they go into cacao farming, said Valente Turtur, chairperson of the Philippine Cacao Industry Council. Even small-scale farmers, with farms of around 1,000 square meters, can go into cacao farming, Turtur said. They can make tableya out of their cacao produce and sell these in the neighborhood, he added.

Recognizing the market potential for cacao, Villar plans to tap government agencies to help to develop the cacao industry.

She said the Philippine Coconut Authority (PCA), the Department of Environment and Natural Resources (DENR) and the Department of Agriculture (DA) could help in the development of the country’s cacao industry. “We will be using these three agencies,” Villar said.

Villar explained that the PCA has to be involved because the cacao and coffee development program would involve coconut plantations. The DENR could assist because cacao and coffee are part of their national greening program. The agriculture department has included the two farm products in their high-value crops program.

Villar has filed Senate Bill 320, which seeks to revive the dwindling cacao industry. However, the senator said she will include the development of the coffee in the bill because it, along with cacao, is also being eyed for intercropping.

The bill will identify the needs of the cacao and coffee sectors, such as the budget for infrastructure support, seedling farms, research and shared facilities, she explained.

Because of its strategic location, the Philippine is among the countries that have competitive advantage in cacao production.

But despite the country’s competitive advantage, only around 30,000 to 35,000 hectares have been planted with cacao, based on industry estimates, according to a road map abstract prepared by Assistant Regional Director Edwin Banquerigo, the DTI National Cacao Cluster coordinator.

Various industry stakeholders had come up with the 2017–2022 Philippine Cacao Industry Road Map. The road map targets the production of 100,000 metric tons of dried fermented beans by the year 2022.

The road map also targets to increase productivity levels to two kilograms per tree per year; expand production areas 100,000 hectares with 50 million trees; increase export to $250 million each year; and generate at least 150,000 direct jobs by 2022.