Celebrating the life and legacy of Don Sergio 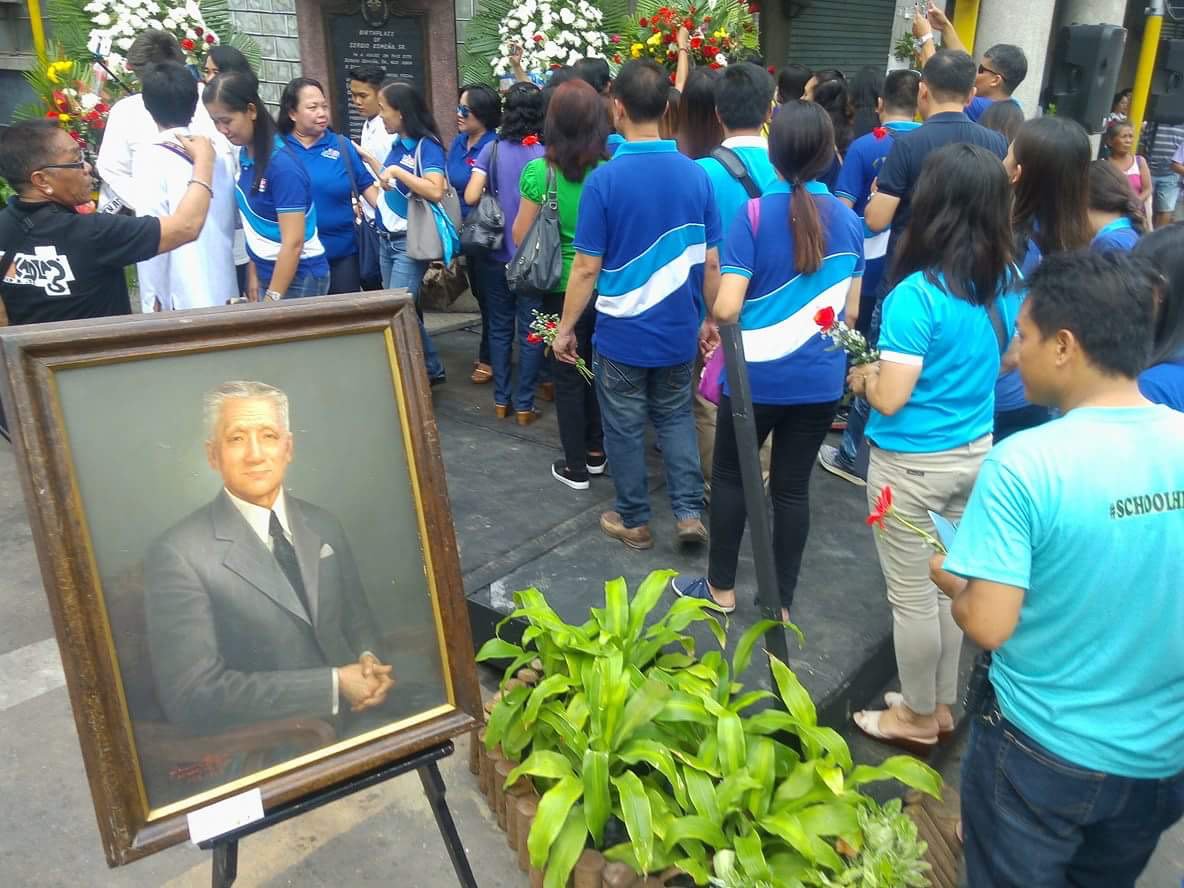 CEBUANOS pay homage to former President Sergio Osmeña Sr. by offering flowers at his marker along Osmeña Street, Cebu City during the commemoration of his birth anniversary on September 9, 2016.  CDN FILE PHOTO

Miguel Osmeña might have no memory of Don Sergio Osmeña Sr., but he has a clear understanding of what his great-grandfather represents not just to the Osmeña clan but to the country.

“What I know about him is basically what everyone else knows,” says the 32-year-old fourth-generation Osmeña, the only son of Cebu City Mayor Tomas Osmeña and Councilor Margot Osmeña.

“(But) I know for a fact that he is called the Great Old Man of Cebu because of all that he has achieved for Cebu and for the country being the first Cebuano president.”

And like the many Osmeñas who descended from Don Sergio, Miguel and his parents will be celebrating the legacy of a great leader today, September 9, the 139th birth anniversary of the Grand Old Man of Cebu.

The Osmeña clan will offer a morning Mass and lay flowers at the Don Sergio marker built at the corner of Lapu-Lapu and Osmeña Streets in Cebu City, where he used to live.

Don Sergio, born on Sept. 9, 1878, died at age 83 on Oct. 19, 1961 in Quezon City and was buried at the Manila North Cemetery in Sta. Cruz, Manila.
To honor the fourth president of the Philippines, September 9 has been declared as an official nonworking holiday in Cebu.

“We pay our respects to him, like we always do,” says Miguel.

He added that the family will also be eating breakfast, and probably lunch, together with the other members of the family to celebrate the life of the family’s patriarch.

Rosalina “Rosie” Osmeña-Valencia, the daughter of Don Sergio, is now based in Manila and will be coming to Cebu to join in the family celebration.

Rosie, now 93, is the best person to speak about her father, according to Miguel.

“Since most of us have not met our great-grandfather, we will be listening to Lola Rosie because she was already an adult when her father died. She has many stories to tell, which we could all learn from.”

Cebuanos are also expected to lay flowers at the marker.

For Miguel, admitting he has yet to look deeper into his great-grandfather’s life aside from his being the foundation of the Philippine government, collecting fifty-peso bills is a way to always remind him of their connection.

In fact, Miguel has more than P20,000 worth of the bank note where Don Sergio’s face is featured.

“I have old fifty-peso bills with me. They’re actually worthless now because they’re old but I’m keeping them.”

Don Sergio was born in Cebu to a single mother, Juana Suico Osmeña. He first studied in Cebu then transferred to Manila to continue his secondary and tertiary education. Manuel Quezon was Osmeña’s classmate.

He took up Law at the University of Santo Tomas and placed second in the Bar exam in 1903.

Sometime in 1901, Don Sergio married Estefania Chiong Veloso, with whom he had 10 children, including Sergio “Serging” Osmeña Jr., the late former senator and grandfather of Miguel.

In 1904, he was appointed by the American colonial administration as governor of Cebu province, and was elected for the gubernatorial position two years after.

In 1907, he was elected as delegate of the Philippine National Assembly and was named first Speaker of the assembly. At 29, Don Sergio was the highest-ranking Filipino official that time. He served as Speaker of the Congress until his election to the Senate in 1923.

In 1920, two years after the death of his first wife, Don Sergio married Esperanza Limjap, the mother of Rosie. They had two more children.

With the support of his wife and children, Don Sergio ran and was overwhelmingly voted as the vice president of Manuel Quezon for two consecutive terms under his self-founded Nacionalista Party.

But while the Philippine government was in exile in the US because of the Japanese occupation, President Quezon died of tuberculosis.

Quezon’s death led to Don Sergio’s rise to presidency. He served as the third president of the Philippines from 1944 to 1946 during the Commonwealth period.

In 1946, Don Sergio decided to run for the highest national position. However, he opted to not hold campaign across the country, saying that he believed his countrymen had seen his honest and sincere service for the last 40 years.

Don Sergio lost to Manuel Roxas, who gained 54 percent of the vote. Roxas then became the first president of the independent Republic of the Philippines. He returned to Cebu, where he spent the remaining years of his life before his death at the Veterans Memorial Medical Center in Quezon City in 1961.

Up until now, 56 years since his death, the country still remembers his great leadership.

These accomplishments, according to Miguel, all stemmed from Don Sergio’s pure heart to serve.

“My father’s lolo became a public servant not because his father used to be a politician too. He came up on his own even when he had no political background. He was a young leader but he was chosen to hold the highest position in Congress,” Miguel says.

The young generations of the Osmeñas, and Cebuanos in general, who only know Don Sergio through history books and stories told by elders, should take pride that a Cebuano once stood by the genuine definition of a leader.

And with all that he had offered to his fellowmen, Don Sergio truly deserves to be called the Grand Old Man of Cebu.

Read Next
Dads to ask Ombud to probe Mayor Tom