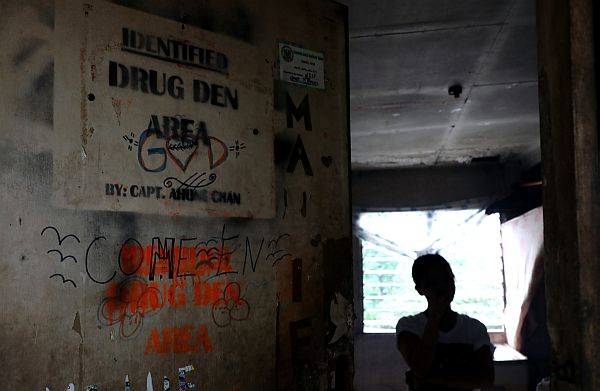 A wall of a house in Barangay Pajo in Lapu-Lapu City is spray painted with an “Identified Drug Den Area” sign, part of the shame campaign adopted by the barangay starting on Sept. 5 as its way to stop the drug menace in the barangay. The campaign initiated by Barangay Captain Junard Chan (right photo, right) has been supported by Lapu-Lapu City Mayor Paz Radaza (right photo, left)) but has been declared by the Commission on Human Rights in Central Visayas as an “unconstitutional” campaign. CDN FILE PHOTO

If Pajo Barangay Captain Junard Chan will continue his shame campaign after the Commission on Human Rights in Central Visayas (CHR-7) declared this as “unconstitutional,” then he will likely face criminal or administrative cases.

CHR-7 Director Arvin Odron gave this warning to Chan in a phone interview with Cebu Daily News on Monday.

Odron, however, said that he was hoping that Chan would heed the CHR-7’s call to stop the campaign and that it would not have to end in filing cases against the barangay officials.

Chan, for his part, said that he was dismayed over the CHR-7’s declaration that the shame campaign is “unconstitutional.”

He also said that he was invited by the CHR investigators to a meeting and he would explain to them his side there.

However, he said if he is ordered by the CHR to stop because the shame campaign is unconstitutional, then he would stop, but he would have to get their side on this and they would have to hear his side of the campaign.

He said he believed that what they were implementing was the proper process.

He said that they are not there to embarrass or to judge if the person is a drug addict, a drug peddler or his house is a drug den.

He also clarified that the owners of the houses, which were spray-painted with Identified Drug Den signs, were the ones who claimed that their houses had been used by drug users.

He said that if it was the community that asked to stop the drug woes in the barangay, then he believed his actions are not “unconstitutional.”

He asked the CHR to help him instead in this endeavor because he was doing it for the good of the community and to curb the drug problem in the barangay.

He cited the increase in the number of surrenderers since the campaign started last month.

He, however, would not give the exact number when asked how many.