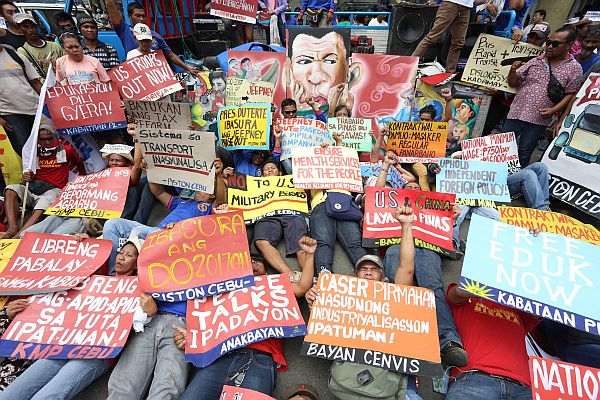 Another mass action has been set today by multi-sectoral groups to protest what they believe is a return of authoritarian rule under the Duterte administration. To avoid tension with rallyists, police had been directed to stay away from the protest venues, except to ensure the smooth flow of traffic.
CDN FILE PHOTO

Not wanting to repeat the dark ages of history, Cebuanos from different groups are set to converge in downtown Cebu City today to oppose tyranny and the alleged authoritarian reign of President Rodrigo Duterte.

“There are signs of a blowing dictatorship in this administration,” said retired Cebu RTC Executive Judge Meinrado Paredes, one of the organizers of the mass action.

At least 500 Cebuanos are set to join the rally which forms part of the National Day of Protest as declared ironically by the country’s top executive himself.

Government work and classes in all public schools nationwide are suspended as mandated under Proclamation No. 319 officially declaring Thursday, September 21, as a National Day of Protest.

President Duterte said the proclamation was “in solidarity with the people’s call against all excesses and shortcomings of the government and with the people’s desire to uphold the highest standards of integrity, efficiency and accountability in government.

The President urged the protesters “to act within the bounds of law, maintain a peaceful conduct of rallies, marches and demonstrations, be vigilant of possible infiltrators who may instigate violence in an effort to provoke the police and other law enforcement authorities and avoid causing any undue inconvenience to their fellow citizens.”

“In view of the proclamation issued by the President declaring September 21, 2017 as a National Day of Protest, and the expected public rallies, marches, demonstrations, and other mass actions in various parts of the country, work in government offices, both national and local, and classes in all public schools at all levels, including state universities and colleges, are hereby suspended on September 21, 2017,” the proclamation read.

The suspension of work in private companies and classes in private schools in affected areas is left to the sound discretion of their respective heads.

Senior Supt. Joel Doria, director of the Cebu City Police Office, said operatives of the PNP Civil Disturbance Management unit have been placed on standby for any eventuality.

In compliance with the directive of President Duterte, all policemen, he said, shall remain in their barracks today.

“Our policemen will just monitor all mass actions,” he told reporters in an interview on Wednesday.

Doria explained that the arrangement is intended to diffuse tensions between protesters and the police.

Deployments for traffic and police visibility, however, will continue, the Cebu City police chief said.

Doria called on the protesters to express their sentiments peacefully and to avoid doing anything that could disrupt the city’s peace and order.

The Cebu Citizen’s Assembly Against Tyranny will converge outside the Santo Rosario Church on P. Del Rosario Street in Cebu City at around 8:30 a.m. today.

The group will march going to Gaisano Metro on Colon Street for a short program before proceeding to Plaza Independencia for another program that includes the laying of wreath and lighting of torches.

The protest rally, according to the organizers, will end at noon.

Emalyn Aliviano of Kilusan Cebu said they will also do a “shame campaign” against Cebu congressional representatives who supported the Congress’ move to reduce the proposed P678-million budget for the Commission on Human Rights to a mere P1,000.

Only three of Cebu’s 10 lawmakers — Rep. Raul del Mar of Cebu City’s north district, Aileen Radaza of the lone district of Lapu-Lapu City and Wilfredo Caminero of Cebu’s second district voted against giving CHR only a P1,000 budget for next year.

The others, Rep. Jonas Cortes (6th district), Rep. Peter John Calderon (7th district) and Rep. Rodrigo Abellanosa (Cebu City, south) were not around during the deliberations.

Paredes, one of those detained during the Martial Law era of the late dictator Ferdinand Marcos Sr., said there is now a semblance of the dark years of the dictatorship in how President Duterte runs the country.

He cited as example the spate of killings and human rights abuses which were also present during the time of Marcos.

Also, Paredes said the President is clearly controlling Congress to advance his policies and agenda.

“It is not really for the good of the people but for the personal and political interest of Rodrigo Duterte,” he said.

“If we don’t resist it, there is a chance that we will return to darkness,” warned Paredes.

Victor Sumampong of Sanlakas Youth is expecting more people to attend the protest rally today since there are no classes in public schools and state universities.

Deputy mayor on police matters, Cebu City Councilor Dave Tumulak, asked protesters to stick to the issues and observe all of the city’s regulations.

“They know Mayor Tommy (Osmeña). They are given the freedom of expression as long as they will not violate the local ordinances. They can express what they want,” he said.

Tumulak said they are also ready to deploy city-owned buses whenever the protesters need them.

“We will ensure their safety so to speak,” he said.

While work is canceled in City Hall today, Tumulak said at least two offices — the Department of Public Services (DPS) and the City Disaster Risk Reduction and Management Office (CDRRMO) —will monitor the protest rallies.

In Mandaue City, Chief Insp. Mercy Villaro, spokesperson of the city police, said they have not been notified of any group that will hold a rally there.
“No one has communicated with us yet,” she said.

Villaro said Mandaue City policemen, however, are ready in case of street protests.

But like in Cebu City and other parts of the country, Mandaue police will stay at their respective headquarters just to monitor and keep order in the streets.

“We mark this day of infamy as another dictatorship casts its shadow over the land. President Duterte has already declared martial law in Mindanao. Will we not allow this man who itches to be Marcos’ successor to impose it on the whole country,” he said.

Then president Marcos declared Martial Law on the entire Philippines on Sept. 21, 1972 to allegedly suppress increasing civil strife and the threat of a communist takeover following a series of bombings in Manila.

Under the president’s command, the military arrested opposition figures, journalists, student leaders and labor activists, as well as criminal elements.

About 30,000 detainees were kept at military compounds run by the army and the Philippine Constabulary. Newspapers were shut down, and the mass media were brought under tight control.

Marcos closed the Philippine Congress and assumed its legislative responsibilities with the stroke of a pen. Martial law was lifted by president Marcos on January 17, 1981 amid mounting local and international pressure to restore democracy in the Philippines. with reports from Jessa Mae O. Sotto, Inna Gian Mejia, Winston Ensomo, and the Inquirer