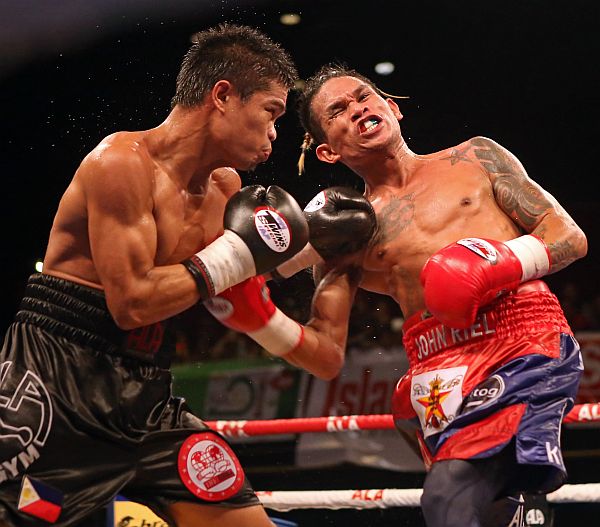 Jonas Sultan (left) proved himself why he is the next big thing in the super flyweight division by beating two-division world champion Johnriel Casimero last September 16 in Cebu City.
CDN PHOTO LITO TECSON

Sultan, of the ALA Boxing Gym, is fresh off a huge upset victory against fellow Filipino and two-division world champion Johnriel “Quadro Alas” Casimero in a rare all-Filipino slugfest last September 16 at the Waterfront Cebu City Hotel and Casino. He won via unanimous decision.

In an interview with Cebu Daily News, Sultan said he is more excited with the idea of fighting Inoue rather than being the mandatory challenger to the IBF world super flyweight title of fellow Filipino boxer Jerwin “Pretty Boy” Ancajas.

“It would be a great honor for me to fight in Japan again,” said Sultan, who holds a record of 14 wins, three defeats and no draws.

He already fought in Japan twice, losing to Go Onaga in 2015 and winning by technical knockout against Tatsuya Ikemizu in 2016.

Aside from Inoue, Sultan also thinks a fight against the Thai champion would be good for the fans.

“I am also willing to fight Rungvisai because I like his style a lot. He’s also very aggressive just like me so I am sure we can give boxing fans a good

Sultan went back to his hometown a week ago and plans to spend his time there with his family until November.

“I will rest here for maybe a month but I will remain active here. I will return at the gym in November and start my training. I am excited to fight for a world title regardless of who I will be facing in the ring. I am confident that I will become a world champion,” he said.