ERMITA TO ROLL OUT SHAME CAMPAIGN 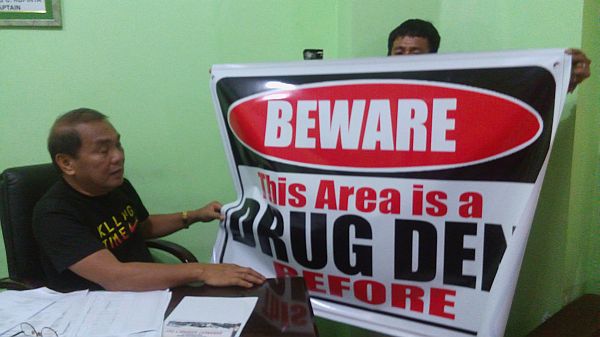 SHAME TARP. Ermita Barangay Captain Felicisimo Rupinta unfolds the tarpaulin that he says they will be posting on houses believed to be drug dens once he gets to clear some legal issues with Commission on Human Rights in Central Visayas (CHR-7) officials, whom he hopes to meet by Monday, October 9, 2017.
CDN PHOTO/MOREXETTE MARIE ERRAM

Less than 24 hours after he decided to stop attaching tarpaulins on houses they identified as “drug-free,” the controversial village chief opted to proceed with his anti-drugs program that was earlier described as discriminatory by the Commission on Human Rights in Central Visayas (CHR-7).

In an interview on Saturday, Rupinta said he chose to momentarily stop posting “This house is a drug-free home” labels on Friday afternoon while waiting for an official directive from CHR-7 Director Arvin Odron, who, speaking through the media, had asked Ermita officials to end their campaign.

Rupinta said he called the CHR-7 office on Saturday, but no one responded.

He said about 500 more houses will get the posters within the week.

He said a number of suspected drug pushers had left the barangay for fear that they will be publicly humiliated.

Moreover, Rupinta said he planned to expand the program by attaching huge tarpaulins on suspected drug dens with the statement “Beware: This area is a drug den before.”

The program is similar to the shame campaign in Barangay Pajo, Lapu-Lapu City, which was also criticized as “unconstitutional” by the CHR.

Rupinta explained that they decided to put the word “before” in the signage, thinking that operators of suspected drug dens will eventually stop their illegal operations once the tarpaulins from the barangays are attached to their houses.

“Kon makabasa ang drug users ani, mahadlok na sila. Dili na sila mosulod nianang balaya so dili na kini ma-consider nga drug den (If drug users read the signage, they will be afraid to enter those houses, so these houses could no longer be considered as drug dens),” he explained.

Rupinta was supposed to attach the “shame campaign” tarpaulins on two suspected drug dens in the village but opted to postpone it while hoping to talk with CHR-7 officials about their anti-drug campaign.

The two suspected drug dens were identified by the Barangay Anti-Drug Abuse Council (Badac), he said.

Rupinta said the two huge tarpaulins that are supposed to be used in their shame campaign cost a total of P1,400, which he personally paid for.
The drug-free tarpaulins, on the other hand, cost P24 each. He said the barangay spent P48,000 for these tarps.

No need for formal order

Sought for comment, Odron said no one was able to respond to Rupinta’s phone calls because the CHR does not hold office on weekends.

He clarified that there is no need for the CHR to issue a formal order to compel Barangay Ermita officials to stop attaching drug-free tarpaulins on houses.

But to clarify issues surrounding the campaign, Odron said the CHR-7 would meet with barangay officials in Ermita on Monday to personally convey to them the need to respect human rights in every program that they would implement.

“While we acknowledge our government officials’ good intention to eradicate the drug menace within their communities, once again, may we remind them that their programs against illegal drugs must be in line with the law, and one that does not violate an individual’s civil and political rights,” he told CDN.

Rupinta said he was willing to sit down and talk with officials of CHR-7 on Monday to once and for all clarify everything about their program.

“Okay. We will wait for Monday. But for now, we will continue posting drug-free tarpaulins on houses,” he said.

Rupinta, however, said they won’t post tarpaulins on suspected drug dens yet as it can be a violation of some laws.

Rupinta and all seven councilors of Barangay Ermita were suspended for six months by the Office of the Ombudsman starting last February for failure to cooperate with the Philippine Drug Enforcement Agency (PDEA) during a drug raid in November 2016.

He said he and the other barangay officials would need to be careful since they would not want to be suspended again.

If he were to decide, Rupinta said he would really push through with the shame campaign on suspected drug dens.

He said the drug dens in Barangay Ermita have been frequented by drug users that included students.

“Mahibo’ong na lang gud mi nganong daghang maglinya dihang mga balaya bisan kon gabii (We were perplexed why many people would line up in those houses even at night),” Rupinta said.

Alilin, 62, said the program is a way of telling people that not all houses in the barangay are infested by drugs.

(I agree with what our barangay captain is doing. Not all houses here in Barangay Ermita are drug dens. Not all are drug users too. We’re being generalized because they say this is a drug hotspot. We don’t want that label, especially we who earn a living by legal means.)

A 13-year-old girl whose house did not get a drug-free tarpaulin said she did not mind that they were not included in the drug-free list.

(That’s only a tarpaulin. My mother was a drug user, but she stopped three years ago. We are the only ones left in this house, and every day, she is out for laundry jobs. I’m not ashamed because we ourselves know we are no longer into illegal drugs).