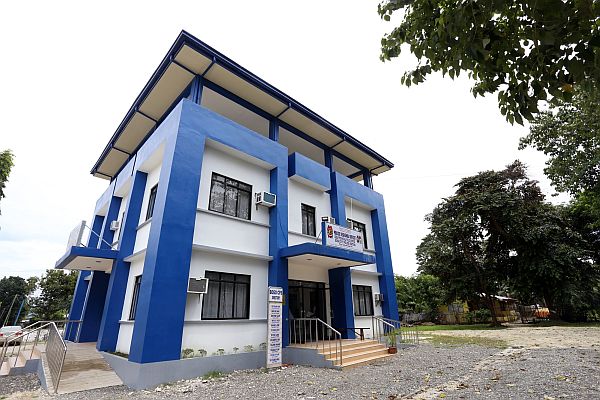 The new Bogo City Police Station, completed just barely five months ago, is where pro-life police officer Supt. Byron Allatog holds office although he spends a lot of his time on the field, reaching out to the different villages of the northern city in hopes of ending the drug problem for good. His tedious method has proven to be very successful. Bogo City has become the first city in Central Visayas and the second nationwide to be declared as “drug-free” by the Philippine Drug Enforcement Agency. The major accomplishment came with zero deaths in police anti-drug operations.
(CDN PHOTOS/JUNJIE MENDOZA)

Raised by parents who taught him that human life is sacred, a police officer assigned in northern Cebu has shunned quick antidotes to the country’s illegal drug problem at a time when killings abound, left, right and center.

While the number of drug-related deaths pile up in other localities, Bogo City has not recorded even a single killing since the policeman assumed his post nearly a year ago, in December 2016.

But despite the absence of bloodbath during police operations, Bogo City, located 97.8 kilometers away from Cebu City, became the first city in Central Visayas and the second nationwide to be declared by the Philippine Drug Enforcement Agency (PDEA) as drug-cleared.

For Allatog, everyone, even the worst criminal, deserves a second chance.

“I am born a Catholic, raised a Catholic even as I converted to Islam when I got married. I am not religious, but I respect human life. As early as kindergarten, I was taught to honor God above all,” Allatog told Cebu Daily News.

Allatog, who was born to a family of farmers in Bontoc town, Mountain Province, belongs to the Bontoc-Igorot tribe.

Growing up, Allatog was taught that anyone who kills another human being must offer prayers and three pigs to atone for sins in a ritual called “chaw-es.”

Considering their lean income, Allatog said it was difficult for his family to get the swine which would cost them at least P30,000.

When he became a policeman, Allatog put into action, both at home and at work, everything that he learned as a child, and highlighted the value of human life.

“Human life is important. Some people say ‘That is a drug addict. He is nothing but trash.’ But do these people even consider the fact that these drug addicts have families? I want people to know that killing is not the final solution to solve the problem of illegal drugs,” Allatog said, his voice calm but convincing.

Allatog, who underwent training at the US Federal Bureau of Investigation (FBI), was once adjudged as the Philippines’ most Outstanding Police Officer in Service by the Metrobank Foundation and Philippine National Police (PNP) in the year 2014.

A graduate of the Philippine National Police Academy (PNPA) Class of 2001, he also served as part of the country’s contingent to the United Nations Peacekeeping Efforts.

Day after day, Allatog visits the villages of Bogo City, making sure that residents are encouraged to share their problems to him and jointly find a solution.

He offers to even the poorest among them his cellular phone number and urges them to text him whenever they have concerns.

“Ever since, my approach is community-based. I want to empower people down to the grassroots level so they will support all our peace and order efforts. I want to establish their confidence and trust. Good enough, I’ve been able to get much support,” he said.

Indeed, Allatog’s community-based approach has led many to offer feedback and reports that are giving the Bogo City Police Station a huge lift.
“Information is powerful,” he said.

After President Rodrigo Duterte launched an all-out war on illegal drugs in July 2016, Allatog deemed it necessary to make people understand the urgency to end the narcotics problem in the country.

“Many of the crimes that are prevalent — theft, robbery, physical injuries, rape — are caused by illegal drugs. It is definitely necessary to wage war against illegal drugs, but not the persons who are into it,” he said.

“I told my men, if it is not necessary to kill, then why do it? Of course, we have to defend ourselves when the call arises. But as much as possible, I want suspects to live,” he narrated.

At least 1,955 users in the city have surrendered to the police, while 45 drug pushers were arrested in different police operations. No one was killed.

Last July 2017, PDEA declared all of Bogo City’s 29 barangays as “drug-free,” a recognition given to localities where there are no more drug pushers.

Allatog said there has been no letup in their campaign against illegal drugs as some drug peddlers from other towns and cities continue to visit Bogo City.

Allatog helps the Bogo City government in its three-month drug rehabilitation programs which involve seminars and physical activities that had made a difference in the lives of more than 200 drug surrenderers.

Bogo City Vice Mayor Maria Cielo Martinez, head of the community-based drug rehabilitation program of the local government unit, said they encouraged those who completed the program to be each other’s support system.

“We are giving drug-surrenderers a reasonable solution to the problem at hand. The good thing is we are so proactive in addressing the issue. We face the problem head on and find solutions to it,” she told CDN.

Drug rehabilitation, she said, is a laborious way to address the illegal drug problem, but it is the right thing to do.

“If we want fast results, that (killing) is the path you take. In all honesty, if you choose the path of no killings, it is a rigorous process. It’s very tedious, labor intensive and drains the resources of the city. We never thought it’s going to be the hard way,” Martinez said.

Though his techniques are tedious, Martinez believes that Allatog is on the right track.

“We support him. I think what he is doing is consistent with our principles and values. Definitely, that’s the direction that we want to take in addressing the drug problem,” she said.

“We have to do what our people deserve. As public servants, we always believe we are here to serve them and to really put forward what is in their best interest, and killing is not one of them,” she added.

Now that Duterte has ordered PDEA to be the “sole agency” in charge of the drug war, the Bogo City police — like all other PNP units in the country — will cease to conduct their own anti-drug operations.

But Allatog promised to do his best to help PDEA in whatever manner, if needed.

“When I’m gone, I want people to at least remember me as someone who served them well. I am but a simple police officer who wants nothing but the best service for the people,” he said.

Before his deployment in Cebu, Allatog was first assigned at the Manila Police District then transferred to the Quezon City Police District. He was eventually assigned as police chief in Bongao, Tawi-Tawi; Autonomous Region in Muslim Mindanao; La Trinidad, Benguet; Cordillera Administrative Region; and Benguet. He was then appointed as assistant regional chief of the Criminal Investigation and Detection Group in Calabarzon.

In all his 17 years of police work, Allatog appears to strongly abide by the PNP pledge of maintaining a high standard of professionalism.

And as the PNP battles to keep its reputation from ruin, Allatog assures that there are still many cops like him who do their best to serve the country well.

“These police scalawags are just too little compared to those who are doing good,” he said.