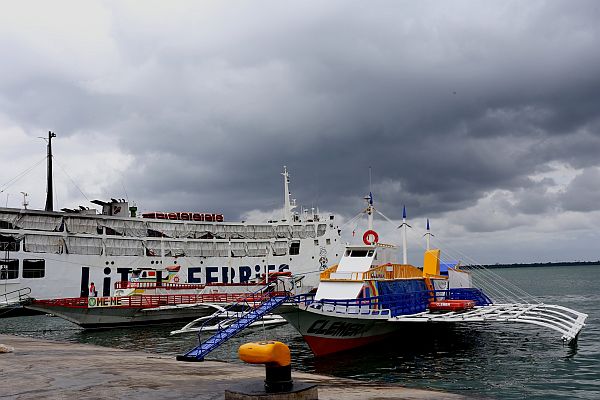 Fast craft vessels opted to suspend their trips despite the lifting of the gale warning as seawaters remained rough.
(CDN PHOTO/JUNJIE MENDOZA)

The gale warning hoisted over Cebu and Bohol has been lifted, but several small vessels like fast crafts still canceled their trips on Saturday due to rough seas.

The Cebu Station of the Philippine Coast Guard (PCG) gave the go signal at 11 a.m. yesterday for smaller seacrafts weighing below 250 tons to sail, two days after the Philippine Atmospheric Geophysical and Astronomical Services Administration (Pagasa) issued a gale warning for the entire Visayas region.

But both the PCG and the Cebu Port Authority (CPA) revealed that several fast crafts opted to cancel their trips due to rough seas around Bohol, Leyte and Siquijor.

PCG second seaman Eljohn Morillo told Cebu Daily News in a phone interview that they are giving shipping companies the discretion whether or not to go on with their scheduled trips yesterday.

“Pagasa just lifted the gale warning in Cebu and Bohol at 11 a.m. (yesterday). The weather is generally fine, but shipping lines still have the discretion whether or not they will cancel trips bound to neighboring islands,” stated Morillo.

Based on the records from the PCG and the CPA, the number of voyages canceled due to the gale warning advisory in the Visayas since last Thursday reached 99.

Yesterday, data from both agencies revealed that close to 400 passengers were affected by the cancellation of boat trips, the bulk of whom are from the Punta Engaño wharf in Lapu-Lapu City who were supposed to ride on motorized bancas bound for Olango Island.

Meanwhile, the CPA said at least 150 passengers were affected by the cancellation of trips, 50 of them stranded in Pier 1 and Pier 3 of Cebu City yesterday.

The recent figures of affected and stranded passengers are smaller compared to last Friday with more than 500 passengers affected, 200 of them left stranded at the ports of Cebu City.

“The number of stranded passengers in our Piers (1 and 3) are now lesser compared to last Friday because some fast crafts and small ferries went on to depart with their scheduled trips,” Baguio said.

Some of the canceled trips in Piers 1 and 3 of Cebu City yesterday included all five fast craft trips bound for Bohol, and a small ferry to Surigao del Norte, due to unbearable sea waves around the island Siquijor.

Pagasa meanwhile said Cebuanos can expect an improvement in the weather condition on Monday.

“The gale warning is already lifted in Cebu and Bohol but not for the eastern and seaboards of Visayas. This means that waves reaching up to 4.5 meters in height and winds with speeds up to 62 knots are present in provinces belonging in the Western and Eastern Visayan regions,” said weather specialist Joey Figuracion.

But he added this will not stay long as Typhoon Paulo, whose eye was spotted 1,080 kilometers northeast of Basco, Batanes, as of 4:00 p.m. yesterday, is expected to leave the Philippine area of responsibility (PAR) anytime today.

The lifting of the gale warning yesterday brought more than 200 passengers to flock to ticketing outlets right outside Pier 1 of Cebu City in order to board a fast craft bound to towns and provinces outside Cebu as soon as possible.

Lynlyn Mata, a native of Mamburao town in Occidental Mindoro, said news of improved weather conditions have rekindled their hopes of vacationing in Bohol.

She said her husband, their two children and three of her close friends, have been waiting inside Pier 1 since 11:30 a.m. yesterday to book a ticket for Bohol.

“We’ve been here since 11:30 a.m. to book tickets to Bohol as soon as possible. We’ve heard that one of the shipping companies that offer ferry trips to Bohol did not cancel. One of my three friends is already queueing just to secure all of us a ticket each. We’re hoping for it not get canceled but if they do, because of big waves, well, we have no choice but to stay in a hotel for the meantime,” Mata said.

Read Next
Moalboal highest in malnutrition