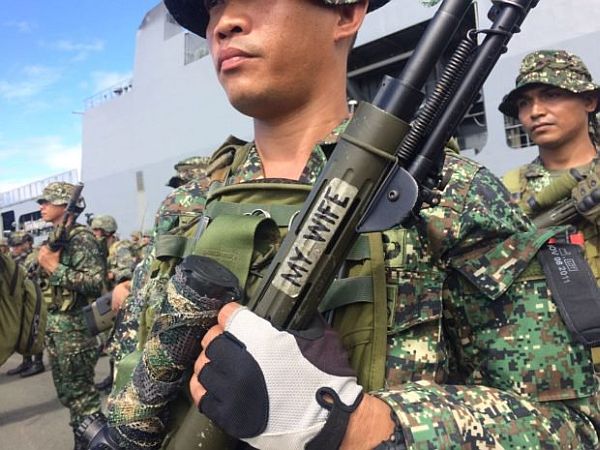 A Philippine Marine arrives from Marawi City and shows his rifle with “My Wife” label. He and a contingent of troops from the war-torn city were welcomed on Monday at Pier 13. /Inquirer Photo

The Philippine Navy has spent about half a billion pesos for ammunition and fuel during the five months of fighting in Marawi City.

Navy chief Vice Admiral Ronald Joseph Mercado gave the assessment in an interview with reporters on Monday at the sidelines of the heroes’ welcome for marines and sailors from Marawi City.

“As far as the Philippine Navy is concerned, just for the ammunition and (and fuel) alone, we nearly extended half a billion pesos and just imagine the number of trips this year undertook to bring all our AFP combat vehicles, artillery, ammunition and people from all over the different islands down to Iligan Island and the fuel for our helicopters,” Mercado said.

In his speech during the ceremony, the navy chief praised the accomplishments of sailors and marines during the Marawi siege, saying they contributed to “half or more” of the success in the campaign against the Islamic State–inspired terrorists.

The navy also used its aerial assets for surveillance and air strikes while its naval assets were used for transport of equipment and troops.

Defense Secretary Delfin Lorenzana said early this month that the government spent around P5 billion for the fuel, ammunition, food and allowances of the soldiers in the past four months.

About 500 marines, sailors, aviators and SEALs from Marawi City returned home to a heroes’ welcome on Monday after a five-month deployment.

Combat operations in Marawi City were officially terminated last week, after five months of fighting. Over 900 terrorists and 45 civilians were killed, while more than 400,000 residents were displaced from the battle between government troops and ISIS-inspired terrorists.

Of the 165 soldiers and policemen killed, 35 were from the Philippine Marines.