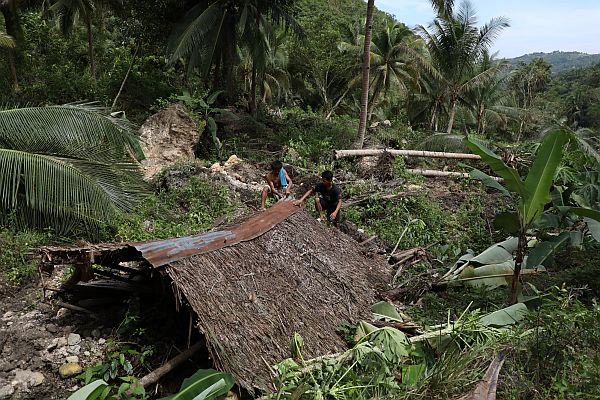 Rannie Moreno and his son try to salvage their belongings from their copra-drying hut that was destroyed by a landslide that hit Barangay Lower Becerril, Boljoon, Cebu on Friday, October 27, 2017.
CDN PHOTO/TONEE DESPOJO

The municipal government of Boljoon has expanded the areas affected by the landslide in Barangay Lower Becerril to three sitios and required all of its residents to abandon these places as it is no longer safe for them to stay there.

From one sitio, the incessant landslide in the area, which was triggered by an active fault line that began moving since Friday, has already affected two more sitios in this particular village, according to Eutemio Tarnate, the acting chief of the Municipal Disaster Risk Reduction and Management Office (MDRRMO) of Boljoon.

Twenty-four families, involving over 200 individuals, from Sitios Calfranco and Upper Cansiloy have abandoned their homes since the landslide has already reached their area. They went to stay with their relatives and friends living in other barangays.

With those from Sitio Sangi (11 families or close to 100 individuals) who were the first to be evacuated last Friday, the number of families directly affected by the unceasing landslide has now reached 35, which is equivalent to more than 300 individuals.

However, Ternate said the total number of affected families in Barangay Lower Becerril could likely reach 240, or over 1,100 individuals.

He said these families may be instructed to leave their houses if experts from the Mines and Geosciences Bureau (MGB) of the Department of Environment and Natural Resources in Central Visayas (DENR-7) find the entire village as a dangerous place to live.

Volcanologists from the Philippine Institute of Volcanology and Seismology (Phivolcs) identified three active fault lines in Cebu, and one of them is located in Boljoon. The other two are found in the southwestern and central portions of Cebu. Areas near and around fault lines are prone to earthquakes and other slight movements of the land.

On Friday, disaster teams from the provincial government of Cebu and the local government unit (LGU) of Boljoon discovered that it cuts across Barangay Lower Becerril.

As of Tuesday, movements of the land in the three sitios of Barangay Lower Becerril have not ceased. It not only resulted in a series of landslides but also changes in the topography of the mountainous terrain of the village.

A half-meter-wide crack, caused by the fault line split the 15 kilometer-long Becerril–Nug-as Road in two. The northbound portion of the road was elevated six meters high.

These events prompted the Boljoon MDRRMO to plan on declaring Sitios Sangi, Calfranco, and Upper Cansiloy as danger zones as means to completely prevent residents from returning in the area. But doing so needed the approval of the town council of Boljoon, a fifth-class municipality located more than 105 kilometers southeast of Cebu City. To convince the council, Tarnate said they needed a comprehensive, scientific study from MGB-7 as basis for their plans.

“We identified Sitios Calfranco, Sangi and Upper Cansiloy as those which are directly affected by the movement in the land. We’re talking about around seven to eight hectares of land moving in different directions. But we needed the study from MGB-7 as basis to declare these as danger zones,” said Ternate.

He added, “We are so alarmed by the unceasing movement of land in these sitios. Due to the unpredictability of fault lines, we wanted to declare them as danger zones because the changing topography in the area is life-threatening. It can bury an entire house without warning.”

Ternate also said the study will not only help disaster response officers in their town to determine whether or not all nine sitios of Barangay Lower Becerril will be declared unfit for occupancy, considering that the village sits atop an active fault line, but also to help government officials of Boljoon to look feasible relocation sites for the residents.

“We will have to discuss with MGB officials about the relocation site. And including the possibility of placing the entire Barangay Lower Becerril as a danger zone. Because basically everything will be based on their study,” he stated.

Geologists from MGB-7, who arrived in the area yesterday, will release their findings once their team has completed their data gathering, said MGB-7 public information officer (PIO) Marian Codilla.

Meanwhile, the Boljoon LGU and the provincial government have sent heavy equipment and teams working around the clock to clear the natural dam in Lusopan River which was formed last Friday when the first landslide struck.

“We already secured the area to make sure the continuing landslides will not claim any life. The natural dam on Lusopan River, on the other hand, is also being worked on. In fact, we have successfully discharged (a depth of five meters) of impounded water,” said Boljoon municipal information officer Ruben Niere.

Niere also hoped that the rains brought by an incoming low pressure area (LPA) will not interrupt and add burden on their task of releasing the huge volume of water that was impounded by the dam, which is made out of uprooted trees and boulders.

“The discharge of water is nonstop since Monday, and that’s 24/7. As long as we keep releasing water, even if it rains, everything will be fine,” he said.

Read Next
Rains today across Cebu as LPA hits the north