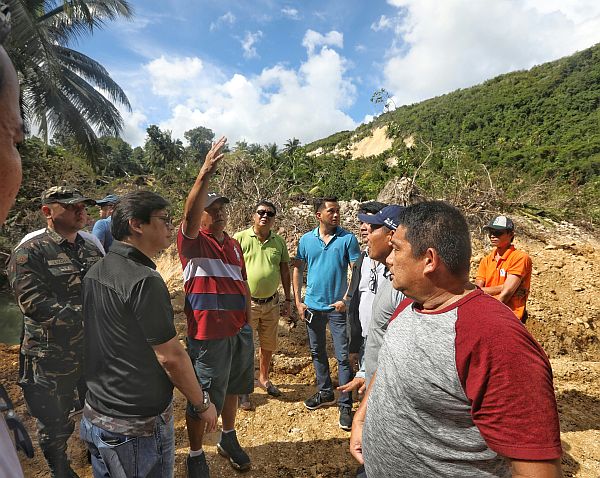 Secretary Michael Dino of the Office of the Presidential Assistant for the Visayas (OPAV) (top photo, left) leads the damage assessment team in inspecting the landslide-hit areas of Boljoon town. At left, a resident checks on one of the houses damaged by the landslide in Barangay Lower Becerril.
(CDN PHOTO/TONEE DESPOJO)

This is the plea of some of the res-idents of the six landslide-affected barangays in Boljoon, a town 105 km southeast of Cebu City, to government officials led by Secretary Michael Dino of the Office of the Presidential Assistant for the Visayas.

The officials visited the town yesterday to assess the landslide damage and distribute food packs and sleeping mats to the affected residents.

One of the more than a hundred individuals displaced by the landslides, Rufina Mendez, 57, said that restoring water supply in their village is an utmost priority.

“We’re grateful with the relief assistance that we received, but, hopefully, they can fix our water supply as soon as possible,” said Mendez in Cebuano, who together with her husband, Mario, had temporarily sought shelter in a concrete house of her neighbor, a few meters away from the landslide-hit portion of Lower Becerril.

According to the Department of Social Welfare and Development in Central Visayas (DSWD-7), at least 38 families or 146 individuals from Sitios Camp Franco and Upper Cansiloy in Barangay Lower Becerril were affected by the landslides.

For the meantime, she and her husband fetch water from the nearby Lusopan River, where two artificial dams caused by the landslides had blocked its flow.

“The water remains uncontaminated. It’s just that force from cascading soil snapped several pipes into two and interrupted the flow downhill to the residents,” said Tribunalo, who was among the government officials who accompanied Dino yesterday.

Tribunalo also said that they were already working on the soil blocking the flow of the river water and as of yesterday, they managed to make the water discharge faster in the blocked area after they created a drainage as a diversion outlet of the water.

The PDRRMO chief also said they are coordinating with plumbers based in Boljoon to assist them on restoring water supply in the area.

Last Friday, the Mines and Geosciences Bureau (MGB) of the Department of Environment and Natural Resources (DENR-7) recommended to declare Sitio Camp Franco of Barangay Lower Becerril as a permanent danger zone and a no habitation zone because it was the worst landslide-hit area in the barangay.

State geologists found out that non-stop rains in the town caused the earth to be unstable, and prone to landslide.

Also on Friday, aside from Lower Becerril, the town council included five more barangays as those under a state of calamity because the landslides had made these areas inaccessible to vehicles.

Barangay Poblacion, on the other hand, was also included because of the risk of a mudslide since it is located downstream of Lusopan River where portions of it were blocked by artificial dams and impounded huge volume of water.

While the PDRRMO is working on restoring the water supply in the area, more assistance are also being given to the affected families and are expected in the coming days.

On Monday, the P1-million calamity fund would be released by the Boljoon town council. This developed after the town officials declared six of the barangays under a state of calamity last Friday.

Boljoon Mayor Merlou Derama said that the part of the funds would be spent on basic necessities of the affected families such as food, sleeping mats and construction materials.

“Our priority here is the basic necessities — food, sleeping mats, and construction materials for their new homes,” Derama said.

With regard to the inaccessible roads leading to the affected barangays, Dino has promised to open an alternative road that will connect Barangay Poblacion to the mountain Barangays of Lower Becerril, Upper Becerril, Nangka, San Antonio and Lunop.

“In coordination with the provincial and local government units we will make sure that the mountain barangay road become passable in time for their fiesta to allow their farmers to bring their produce and to prevent a bigger disaster if the artificial dam breaks,” said Dino.

The 15-kilometer-long Becerril-Nug-as Road that traversed across these six villages was severely damaged by the unceasing landslides, and needed extensive repair.

Although it was already passable for motorcycles yesterday, incumbent Boljoon Mayor Merlou Derama said they still needed another road for heavier vehicles to access the area.

“Through the Opav, our request of opening up a new road was heard. But we will have to conduct further assessment on this one. We need another road to transport the harvests in our barangays to the market in the town proper,” Derama added.

Derama also revealed yesterday that a religious group, who owned a 25-hectare property in Barangay Lower Becerril, committed to donate it to the displaced families as their permanent relocation site.

“The lot, which was owned by the Iglesia ni Cristo (INC), can accommodate up to 200 families,” he added.

Last Saturday, it was also announced that a four-hectare property owned by Cebu Archdiocese would also be donated as a relocation site for the affected families.

“But we have to ask the opinion of the affected residents also. We will have to consider what they want when they will be transferred here,” explained Derama.

Derama also said that he hoped that the fiesta celebration on November 10 would be a joyous one as more assistance for the affected families had arrived.

Boljoon is celebrating its 41st founding anniversary on Nov. 10 and its annual fiesta on that day honoring their patron saint, Our Lady of Patrocinio.

“We’re so grateful with the additional assistance and support from the government in the provincial, regional and national level. Hopefully, everything will return to normal on or before the fiesta, which is on November 10,” said Derama. Among the agencies that accompanied Dino yesterday for damage assessment in Boljoon town were officials from the DSWD-7, Department of Public Works and Highways (DPWH-7).