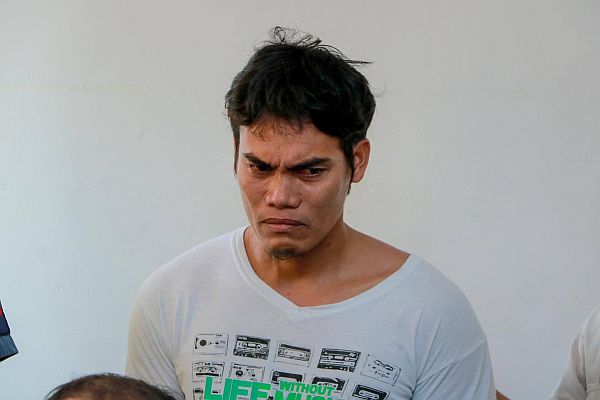 Felix Taytayan, suspect in the killing of PO1 Mae Sasing, breaks down in tears as he is presented to the media after a charge of murder was filed against him.
(CDN PHOTO/TONEE DESPOJO)

Murder raps filed vs suspect who denies any hand in killing

These were the only words spoken by Felix Taytayan in response to several queries over his alleged involvement in the death of his ex-girlfriend, PO1 Mae Sasing.

Wearing a white T-shirt with prints and dark shorts, the criminology graduate and nautical apprentice was presented by police investigators to the media on Monday, three days after he was arrested in his hometown in Madridejos town on Bantayan Island, north Cebu.

He was considered as the primary suspect in the ambush-slay of Sasing last October 31 over what police investigators described as a “crime of passion.”

His eyes welled up with tears when asked if his relationship with Sasing continued even after college. Taytayan, however, kept his composure and did not give any answer.

A murder complaint was filed by the police against Taytayan at the Mandaue City Prosecutor’s Office on Monday morning.

When presented before Assistant Prosecutor Henry Pascua, Taytayan opted to undergo a preliminary investigation which gave him the chance to file a counter-affidavit and refute the allegations against him.

The prosecutor has 15 days to resolve the case.

If there were enough grounds to indict Taytayan, the charges against him would be elevated to the Regional Trial Court. Otherwise, the case would be dismissed.

Murder is a non-bailable offense.

While waiting for the resolution of the prosecutor, Senior Supt. Roberto Alanas, director of the Mandaue City Police Office (MCPO), said Taytayan would be detained at the Police Station 3 in Barangay Jagobiao.

Taytayan had yet to secure the services of a lawyer.

Mandaue City Mayor Luigi Quisumbing lauded the efforts of the local police to immediately identify one of the two perpetrators in Sasing’s killing.

“I take crimes committed in this city personally, and all the more when it is committed against the very people tasked to keep the peace and order (in the city),” he said in a text message to Cebu Daily News.

Quisumbing earlier dangled a cash reward to anyone who could provide information that would lead to the arrest of the assailants. He, however, did not give any specific amount.

Alanas said their witnesses were not after the reward but only wanted to help the victim’s family attain justice.

“On the part of the police, we just performed what we were supposed to do even without any reward money,” he said.

Although Taytayan’s arrest was basically a product of police work, Alanas said they got a huge help from the community.

At least three witnesses executed sworn statements which were attached to the murder complaint filed at the Prosecutor’s Office.

Alanas said one witness claimed to have seen Taytayan talking to Sasing outside the policewoman’s residence in Barangay Jugan, Consolacion town, northern Cebu last October 30, a day before Sasing was killed.

“The witness said the suspect went to the area where the victim was, and then they had a short conversation,” he said.

A few hours before the ambush last October 31, the police official said another witness saw Taytayan outside the City Public Safety Company (CPSC) of the Lapu-Lapu City Police Office where Sasing was assigned.

The third witness allegedly saw Taytayan shoot Sasing near the vicinity of Consuela Village in Barangay Basak, Mandaue City, around 7 p.m. The suspect was reportedly not wearing a full-faced helmet when he shot the policewoman on board a motorcycle.

“We have a strong evidence against the suspect,” Alanas said.

The police continue to go after the driver of the motorcycle that was used during the ambush.

Taytayan and Sasing went to the same university in Cebu City where they both studied criminology.

When Taytayan graduated in 2008, he applied to become a policeman, but he didn’t pass the examinations.

Instead, he decided to take nautical courses and was now taking his apprenticeship.

At the wake of Sasing in Barangay Jugan, her parents and siblings confirmed that Taytayan was her boyfriend during their college days, but their relationship had long ended.

Sasing now had a live-in partner, the father of her now seven-year-old daughter, who was in Palawan to tend to his family’s farmland.

In an interview last Sunday, Sasing’s mother Virginia recalled that when Sasing’s daughter was four years old in 2014, the policewoman once mentioned that she met a former classmate who was named Taytayan.

Taytayan recently began courting Sasing anew, but the policewoman reportedly treated him as a friend.

Marvin Locsin, the victim’s live-in partner for seven years, flew back to Cebu on Saturday after learning about Sasing’s death.

“Di ko tanggap ang nangyari sa asawa ko dahil mahal na mahal ko siya (I still could not accept what happened to my partner because I love her very much),” he said in an interview with TV Patrol Central Visayas on Monday.

Locsin vowed that he would make sure Taytayan would rot in jail.

But Virginia said she had already entrusted everything to God and prayed for the eternal repose of her daughter.

“I pray that God will take care of everything,” she said in an interview.

Sasing is the third of five siblings.

Her older sister Geraldine could not hide her emotions when she saw Taytayan at the Mandaue Police Station 3.

“Nagkurog gyud ko sa kalagot nga nagtan-aw niya (I was shaking in anger while looking at him),” she said.

Sasing, 31, was driving her motorcycle on her way home to Barangay Jugan in Consolacion town when two men on board another motorcycle drove by the victim when they reached Barangay Basak, Mandaue City.

The back rider, whom police later identified to be Taytayan, fired shots at Sasing.

The policewoman was rushed to the hospital but was declared dead on arrival by the attending physician due to gunshot wounds at the back of her body and her head.

Sasing lies in state in the family residence in Jugan. Interment is set at the Manila Memorial Gardens in Lilo-an town on November 12. /with reports from Fe Marie Dumaboc

Read Next
Motorists urged to rest before driving