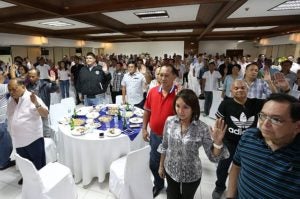 Cebu Rep. Gwendolyn Garcia (second from right) leads the 300 local government officials from other polical parties in switching their alliances to the PDP-Laban party during the Aug. 27, 2016 mass oathtaking ceremony at the Sacred Heart Center in Cebu City.
CDN FILE PHOTO

This will usher in a new era of political unity in the province.

Deputy House Speaker and Cebu 3rd District Rep. Gwendolyn Garcia said this to describe the move of 12 mayors under the Liberal Party and other local government officials under One Cebu party to switch to the Partido Demokratiko Pilipino–Lakas ng Bayan (PDP-Laban).

“One Cebu Party, the original coalition partner of PDP-Laban in Cebu since the May 2016 elections, welcomes to the fold of President Rodrigo Roa Duterte’s coalition for genuine change, the thousands of officials and leaders who will take their oaths as members of PDP-Laban on Friday (November 17),” said Garcia in a statement, where she also announced another batch of mayors from the One Cebu party to take their oath as new members of the PDP-Laban party.

Garcia, who is a former Cebu governor, said that the developments in the local political arena in Cebu meant a “newfound unity.”

They were scheduled to take their oaths on November 17 in a mass oathtaking.

Last August 16, 2016, at least 300 politicians of Cebu province belonging to the United Nationalist Alliance Party (UNA) and the Liberal Party (LP) swore their allegiance to the PDP-Laban in a mass oathtaking.

One Cebu initially formed allegiance with UNA, but in April 2016, a few weeks before the May 2016 National Elections, they switched to PDP-Laban in support of President Duterte.

Out of the 53 local government units that make up Cebu, at least 11 towns (Alcoy, Asturias, Balamban, Barili, Borbon, Liloan, Malabuyoc, Moalboal, Pilar, Pinamungajan and Santa Fe) are currently governed by local chief executives who ran under One Cebu.

Some of whom had already switched their alliance to the PDP-Laban as they joined the mass-oathtaking to the President Duterte’s party last August 2016.

Balamban Mayor Ace Binghay, who run under One Cebu, confirmed in a text message that he had already been a PDP-Laban member since August 2016.

Meanwhile, Garcia, in a statement, also said One Cebu welcomed the decision of at least 12 mayors from the southern towns of Cebu to switch from Liberal Party (LP) to PDP-Laban.

“We fully support the political master stroke of Speaker Pantaleon Alvarez, Secretary General of PDP-Laban; and Presidential Assistant for the Visayas, Secretary Michael Dino, in consolidating all political forces that, after the May 2016 elections, have now seen the light and switched their support from their old parties and loyalties to the administration of President Duterte and PDP-Laban,” said Garcia in a statement.

When asked about the possibility of losing the support of the LP mayors who switched parties despite their assurance of supporting Governor Davide, a staff member from the Capitol’s Public Information Office (PIO) said that the governor would issue his statement about this statement today (Wednesday).

Davide, who confirmed on Monday the move of the 12 LP-allied mayors from the second and seventh districts of Cebu to the PDP-Laban party earlier, said that they assured him of their support despite being members of the PDP-Laban party.

But with the alliance formed between PDP-Laban and One Cebu, it is possible for the former LP mayors to shift their support from Davide, to the official the PDP-Laban would choose.

Tuburan Mayor Democrito Diamante, who is also the president of the League of the Municipalities of the Philippines-Cebu Chapter (LMP-Cebu), said in a phone interview that they would have to wait for directions from the national officers of the PDP-Laban party about this matter.

Diamante, who switched from LP to PDP-Laban last June 2017, earlier said that he assured Davide of his backing in the elections.

“As new members of the party, we are expected to carry out what is instructed to us by the national officers of PDP-Laban. We will wait for their directives,” said Diamante yesterday.

The shifting of alliances, however, is not a new thing in Cebu’s political scene.

It can be recalled that majority of Cebu’s mayors, both in the cities and the municipalities, shifted from former President Gloria Macapagal-Arroyo’s Lakas-Kampi to LP after the 2010 elections where LP presidential candidate, Benigno Aquino III won and was declared as the president of the country.