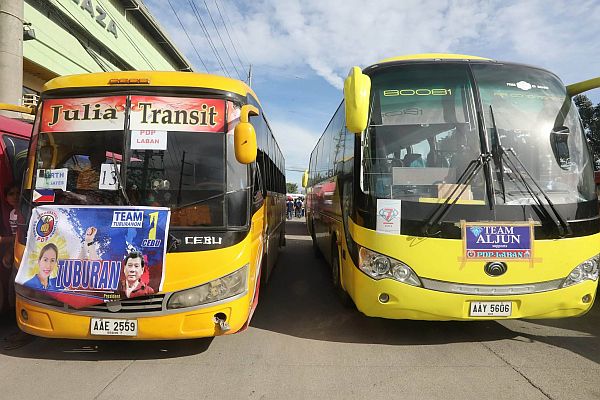 The buses used to ferry supporters of Daphne Lagon and Democrito Diamante of Tuburan town are parked close to each other near Plaza Independencia in Cebu City. Dimante continues to sit as Tuburan mayor while Lagon await implementation of the Comelec order naming her as new town mayor. CDN photo/Tonee Despojo

Scarcity of transportation was experienced at the Cebu South Bus Terminal (CSBT) yesterday after buses that were supposed to ply south Cebu routes were leased to ferry participants of the mass oath-taking of the Partido ng Demokratikong Pilipino – Lakas ng Bayan (PDP-Laban) held at the Plaza Independencia.

Joey Herrera, CSBT manager, said terminal commuters had to wait longer than usual to get a ride to their destinations.

The lack of buses was especially felt during the peak hours from 5 p.m. to 9 p.m.

“We lacked buses needed to transport south-bound passengers. The branch manager of Ceres Bus Liner alerted us last Wednesday that some private groups hired at least 50 of their buses for today’s ceremony,” said Herrera.

However, Herrera said, at around 9 a.m. on Friday, Vallacar Transit pulled out 24 more buses from CSBT to cater to the transportation needs of participants coming from the cities of Talisay and Lapu-Lapu.

The company made a commitment to resume serving their south Cebu route starting at 6 p.m., he said. But there is no certainty that this will be met considering the traffic volume in Cebu on a Friday night.

Ahmed Cuizon, director of the Land Transportation Franchising and Regulatory Board in Central Visayas (LTFRB-7), said his office issued a total of 157 special permits to allow buses to ply outside of their designated routes for the day.

He said 74 of the special permits were issued to Vallacar while the remaining 83 permits were given to other bus companies including those that ply north Cebu routes.

Herrera said the CSBT management was unable to prepare for the bus shortage because of the short notice given to them by Vallacar Transit.

Herrera said around 200 buses would service at least 2,500 south Cebu commuters on Friday, which is considered as a peak day for travel.

“(And) that’s even not enough to ferry all passengers,” he told CDN.

Commuters who could no longer be accommodated at the terminal were advised to postpone their trips the next day.