Sto. Niño traslacion to be extended to Lapu-Lapu 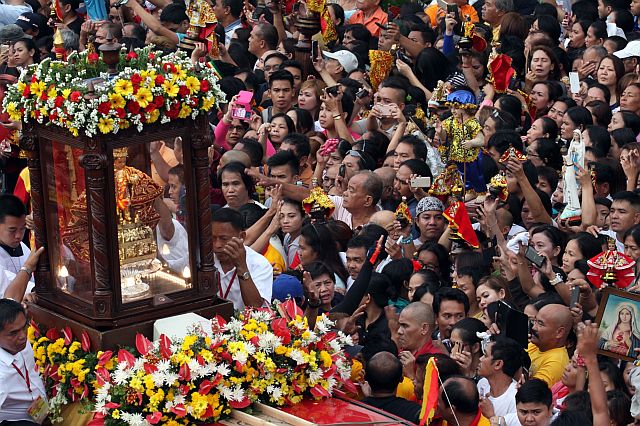 Hundreds of devotees wave their hands to the image of the holy child Sto Niño as he is about to leave the basilica to St. Joseph shirne in Mandaue City for todays pluvial procession during the start of the traslacion.(CDN FILE PHOTO)

Oponganons have something to smile about.

For the first time in history, the images of the Sto. Niño and the Our Lady of Guadalupe will drop by the Nuestra Señora de Regla National Shrine in Lapu-Lapu City shortly before the start of the fluvial procession on January 20, 2018.

The Augustinian fathers of the Basilica Minore del Sto. Niño have decided to extend the annual traslacion from Mandaue City to the adjacent island of Mactan, particularly in Lapu-Lapu City, in respond to numerous requests from Oponganons who want to be visited by the images during the festivities.

“We’re not, in any way, changing the spirit of the traslacion. We will simply extend it to Lapu-Lapu City to allow more devotees to venerate the sacred images. We’re doing this for the pastoral need of reaching out to more people as the devotion to the Child Jesus continues to grow year after year,” said Fr. Ric Anthony Reyes, OSA, the secretary of the 2018 Fiesta Señor Executive Committee in a press conference on Friday.

The modifications were approved by Cebu Archbishop Jose Palma.

As in previous years, the traslacion or ritual transfer of the images of the Sto. Niño and the Our Lady of Guadalupe will start after the 5:30 a.m. Mass on January 19, Friday, from the basilica to the National Shrine of St. Joseph in Mandaue City

Mandauehanons will welcome the images at the boundary of the cities of Cebu and Mandaue in Banilad, said lawyer Paul Yabao, overall Fiesta Señor consultant.

The motorcade will pass A. del Rosario St, and S.B. Cabahug Street before reaching the shrine in Mandaue City where the two images will stay for an overnight vigil.

At 2 a.m. on Saturday, January 20, a send off Mass will be celebrated at the National Shrine of St. Joseph. But unlike previous years, there will be no more foot procession that will bring the images of the Sto. Niño and the Our Lady of Guadalupe to the Ouano Wharf.

Instead, the images will be transported in a motorcade to the Nuestra Señora de Regla National Shrine in Lapu-Lapu City for a public veneration.

At around 5:30 a.m., the images will be brought to the nearby Muelle Osmeña for the start of the fluvial procession along the Mactan Channel.

Another modification in next year’s religious activity is the use of another sea vessel to transport the images of the Sto. Niño and the Our Lady of Guadalupe back to Cebu City by sea, instead of the yacht owned by the family of the late Ernesto Ouano, which was traditionally used as the “galleon” of the Child Jesus for about three decades.

Fr. Aladdin Luzon, OSA, director of the Safety, Security, and Peace and Order Committee of the Fiesta Señor, said they decided to give other owners of sea vessels the chance to accommodate the sacred images during the fluvial procession.

BRP Bagobo AT-293 of the Philippine Navy was chosen to transport the images of the Sto. Niño and the Our Lady of Guadalupe in next year’s fluvial procession.

The vessel has a capacity of 150 persons. Aladdin Luzon said among those who will be allowed to board the vessel are Archbishop Palma, priests, the present and former Hermano and Hermana Mayores, and men dressed as Spanish soldiers who will take part in the reenactment of the first Catholic Mass, baptism, and wedding that follows after the fluvial procession.

“We will entertain bidders or ship owners who want to accommodate the images of the Sto. Niño and the Our Lady of Guadalupe in future fluvial processions. The Ouanos of Mandaue can still join,” he said.

Luzon said that were requests from the Ouano family to forego the modifications, and instead continue the tradition of bringing the images to their private wharf as well as use their galleon for the fluvial procession.

But the Augustinians, he said, stood firm on their decision to extend the traslacion to Lapu-Lapu City, and to allow other ship owners to transport the images of the Sto. Niño and the Our Lady of Guadalupe.

“We expect oppositions as we implement the modifications in the traslacion. We apologize for whatever these may cause. But we consider the wide-ranging benefits, or the pastoral need of reaching out to more devotees,” Luzon explained.

The Augustinians were the first missionaries to arrive in the country in 1565. They were present when Portuguese explorer Ferdinand Magellan gave the image of the Sto. Niño to Cebu’s Queen Juana as baptismal gift in 1521.

Given the growing number of Sto. Niño devotees, Fr. Reyes appealed to the people to consider the greater good these modifications will bring about.

“We can’t please everybody but we stick to our plans. I hope the people will reflect on the need for a more universal celebration of our devotion to the Sto. Niño,” he said.