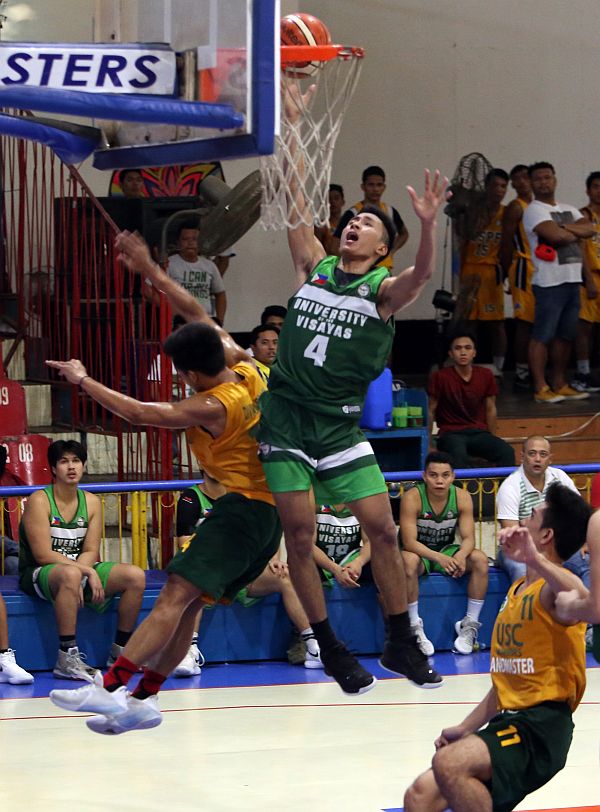 Rey Suerte of UV soars for a layup against USC in an Asian Pacific University Games basketball game at the Cebu Coliseum.
CDN PHOTO/LITO TECSON

The University of Southern Philippines Foundation (USPF) Panthers proved to be rude hosts as they welcomed the visiting Malaysia Universiti Teknologi MARA of Malaysia with a huge 74-35 shellacking in the Asia Pacific University Games 2017 yesterday at the Cebu Coliseum.

The writing was on the wall early as the Panthers led, 34-7, after the first canto. It was the start they needed to propel them to the easy win in this six-team tournament.

Sharpshooter Lyndon Colina led USPF with 19 points as all but one player tallied at least a point.

Amir Bin Roshad paced the team from Malaysia with 16 points.

In the day’s opening game, the reigning Cesafi champions University of the Visayas (UV) Green Lancers clobbered the University of San Carlos Warriors, 92-78.

Former Cesafi MVP Rey Suerte led the Green Lancers in scoring with 17 points while big man Monic Soliva added 16 markers, all of which were scored in the final 20 minutes of action.

The Warriors were actually ahead by a slim margin, 61-58, heading to the fourth. But the Lancers asserted themselves when it mattered most,

uncorking a huge 34-17 kick in the final canto to run away with the win.

Suerte, Soliva and new recruit, Melvin Butohan, sparked the fourth period siege as they combined to score 26 points in that stretch.