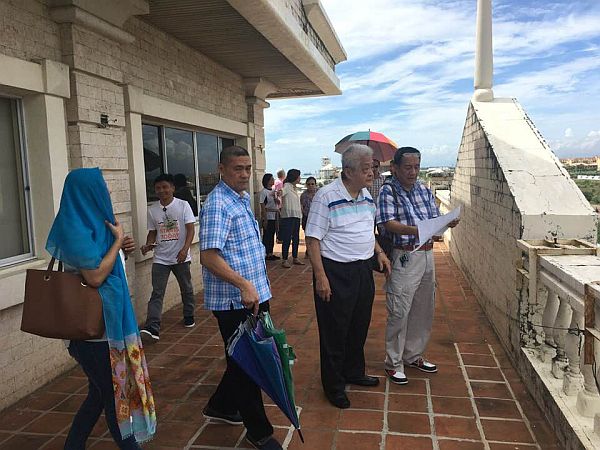 Business tycoon John Gokongwei Jr. (third from left) gets a briefing from Cebu City Administrator Nigel Paul Villarete about the city-owned Kawit property that the Gokongwei-led JG Summit has proposed to develop into a mixed-use commercial district at an estimated cost of P18 billion, in this photo taken on Dec. 27, 2017.
FB NAGIEL BAÑACIA

Cebu City officials got a surprise visit yesterday from one of the country’s biggest business magnates.

“I think he just wanted to see for himself the site. That’s good business practice, to see what you’re investing in,” said City Administrator Nigel Paul Villarete who welcomed and met with Gokongwei.

The visit lasted for only about 15 minutes.

The 91-year-old Gokongwei patriarch, who was accompanied by some family members, went up to the Sugbo Building, which offers a 360-degree view of the SRP, especially the Kawit property.

The Gokongwei-led JG Summit Holdings Inc. has submitted an P18-billion unsolicited proposal to the city government to lease the eight-hectare Kawit property for 50 years.

They will be developing the area and will be putting up a hotel, convention center and casino, among others.

JG Summit, which is controlled by the Gokongwei family, has wide interests in air transportation (Cebu Pacific), banking, petrochemical, power generation and distribution, real estate and hotel, and telecommunication sectors, among others

It also owns the Robinsons malls and Universal Robina.

According to Villarete, the visit and site inspection was a sudden schedule made by Gokongwei who was in Cebu for other matters.

“He just wants to know where the boundaries are, and where the seafront is. We just showed him the place,” Villarete added.

There was no meeting or further discussions after the inspection.

While it was the first time for Gokongwei himself to visit and see the Kawit property, it was not the first time that somebody from JG Summit came to the area.

According to Theresa “Ganzo” Sederiosa of City Hall’s Economic and Business Unit, representatives from JG Summit and Robinsons Land Corp. have visited the site two or three times prior to the submission of their unsolicited proposal to City Hall.

Cebu City Mayor Tomas Osmeña earlier announced that JG Summit has proposed to build four towers in the site, to include a hotel with 1,000 rooms, a restaurant, a casino, and a convention center, among other amenities.

Based on initial discussions, the city will get between 10 to 15 percent as share from sales of the development. Other details are still under discussion.
The proposal is currently pending in the city government’s Joint Venture Selection Committee (JVSC), which is headed by Villarete.

Villarete said the proposal is still undergoing review by the JVSC in accordance with the city’s ordinance on joint venture proposals from the private sector.