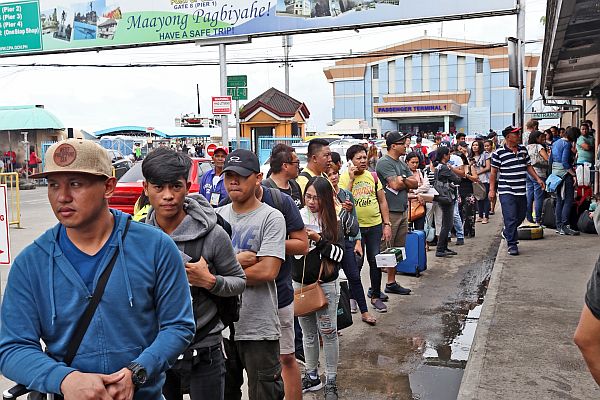 Hundreds of passengers bound for Leyte and Bohol queue as they wait for their turn to buy tickets to return home for the New Year at the Cebu City port. However, some trips for Ormoc, Negros Oriental, and Negros Occidental were canceled on Saturday causing 789 passengers to be stranded at different ports in Cebu.
CDN PHOTO/JUNJIE MENDOZA)

With the state weather bureau advising the public about a possible tropical depression that would possibly affect Central Visayas and Cebu on New Year’s Day, the seas around Cebu have also started to get rough, forcing at least two shipping firms to cancel their trips on Saturday that stranded 789 passengers in different ports in Cebu.

Al Quiblat, Philippine Atmospheric, Geophysical and Astronomical Services Administration (Pagasa) Mactan chief, advised the public to remain vigilant in celebrating the New Year as a low pressure area which was expected to enter the Philippine Area of Responsibility (PAR) on Saturday evening, could be expected to turn into a tropical depression on Sunday night (December 31) or dawn of Monday (January 1).

Quiblat, however, said on Saturday afternoon that the track of the LPA was getting more defined and directed between Caraga Region and Eastern Visayas.

If the LPA will hit its first landfall at the Caraga, it is expected to traverse across Lanao del Norte and Zamboanga Peninsula before it exits at the Sulu sea.

This will cause light to moderate with occasional heavy rains in the Visayas and Mindanao area on Sunday and Monday night.

If the LPA will develop into a tropical depression on January 1, it will be the first storm to enter the country in 2018 and will be named “Agaton”, said Quiblat.

He said that it would be expected to develop into a storm and would exit the Visayas and Mindanao land masses before it would hit Palawan for its second landfall on January 2.

These included the seven canceled trips of two shipping companies at the Cebu City Pier 1.

Rhea Oporto, terminal operations officer of the Cebu Port Authority (CPA), said in a phone interview on Saturday that the fastcrafts of Oceanjet and SuperCat had canceled trips on Saturday afternoon.

She also said that a small vessel going to Ormoc which had already left at 10:30 a.m. had returned to Terminal One yesterday noon, while some vessels arrived late from their schedules.

“Ang gikan sa Ormoc nga naabot karon 5 p.m. kay dili na mobalik sa pagbyahe (The vessel from Ormoc which arrived at 5 p.m. will not be allowed to sail to Ormoc),” she said in a phone interview.

Garcia said that the gale warning from the weather bureau only covered Eastern Visayas.

Garcia, however, said canceling the trips without an order from the Coast Guard would be at the discretion of the shipping companies.

The Coast Guard also noted shipping companies canceling trips in the ports of Hagnaya, San Remigio, and the Sta. Fe port in Bantayan Island in northern Cebu, Tangil, Dumanjug in southwestern Cebu and in Toledo port in western Cebu.

Also on Saturday, hundreds of bus passengers heading to southern Cebu were also stranded for a few hours at the Cebu South Bus Terminal (CSBT).

Jonathan Tumulak, CSBT assistant manager, said that there were a shortage of buses because they had difficulty returning to Cebu City due to traffic caused by the the ongoing road work at the San Fernando to Naga City stretch.