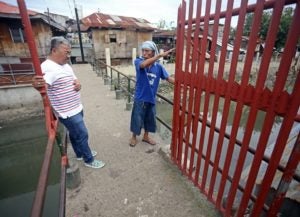 A footbridge in Sitio Magsaysay in Barangay Pasil that connects to Barangay Ermita, Cebu City has been ordered demolished by the Barangay Anti-drug Abuse Councils (BADAC), this after several residents in Pasil complained of illegal transactions under the bridge.

According to Pasil Barangay Captain Julius Guioguio, the BADAC created a resolution ordering the demolition of the footbridge.

Guioguio said they have yet to send a copy of the resolution to Barangay Ermita officials for formality.

The demolition, said Guioguio, will start once they have met and agreed with the local officials from Ermita.