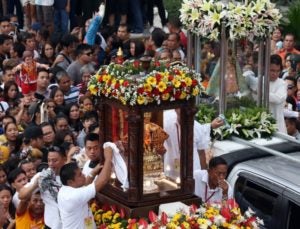 The riding public is advised to avoid the Traslacion procession route to avoid being caught in traffic congestion.
CDN File Photo

Mandaue City Hall already had its security and traffic plans set for the Traslacion on January 19 and 20.

Glenn Antigua, chief of the Traffic Enforcement Agency of Mandaue (TEAM), said the public are advised to plan their trips earlier to avoid the traffic congestion for the two-day event

He said the Mandaue City Police Office (MCPO) will deploy 200 police personnel to cover all areas along the Traslacion route which will be closed to motorists and public utility vehicles (PUVs) for the duration of the event.

About 20 soldiers will beef up police personnel stationed along the procession route along with force multipliers like barangay tanods and emergency medical teams.

“We encourage the motorists to stay away from A.S. Fortuna, A. Del Rosario streets and other connecting roads since these will be the route of the Traslacion,” Antigua said.

According to Senior Inspector Rodgene Foduton, Deputy Chief of Operations Division of the Mandaue City Police Office they discourage devotees and spectators from bringing a backpack for security reasons.

Firecrackers, balloons and tarpaulins are also prohibited along the Traslacion route.

At noon on Friday, Jan. 19, A. Del Rosario in Barangays Guizo and Mantuyong and SB Cabahug Street in Barangay Centro will be closed again to give way to the participants of the Panagtagbo Festival street dancing competition at 3 p.m.

These roads will be opened after the contingents pass through except the road fronting the church.

Mario Advincula, president of the Parish Pastoral Council of the National Shrine of St. Joseph, said the veneration of the Señor Sto. Niño is not allowed during the day Masses but only after the 6:30 p.m. Mass up to 1:30 a.m.

The send-off Mass starts at 2 a.m. Saturday and the pilgrim images will proceed from the Shrine to the Birhen sa Regla Parish in Lapu-Lapu City, passing through C. Ouano street, D.M. Cortes street and A.C. Cortes avenue in Mandaue City to the Mandaue-Mactan bridge.