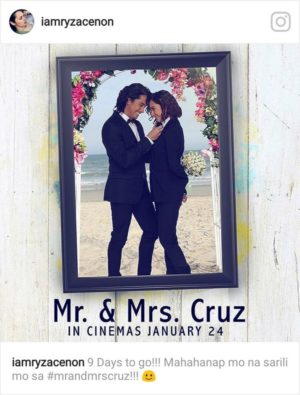 KAPAMILYA actor JC Santos and Kapuso actress Ryza Cenon are starting the year with a new film together titled, “Mr. and Mrs. Cruz.”

The film is written and directed by Sigrid Andrea P. Bernardo, who directed the surprise hit, “Kita Kita.” Produced by Viva Films, “Mr. and Mrs. Cruz” will hit cinemas on January 24.

Based on the official trailer which was released a month ago, the film is about Raffy (Santos) and Gela (Cenon) who have different views about marriage.

It shows Cenon asking Santos, “Do you believe in marriage?”

Santos then replies, “No. I believe in commitment.”

Part of the trailer also shows Santos asking Cenon, “Now tell me why marriage is important aside from legal matters?”

Both stars have been promoting the film through mall shows and their social media accounts.

Santos on his Instagram account shared the movie’s poster with the caption: “What makes a couple? Love. Commitment. Marriage?”