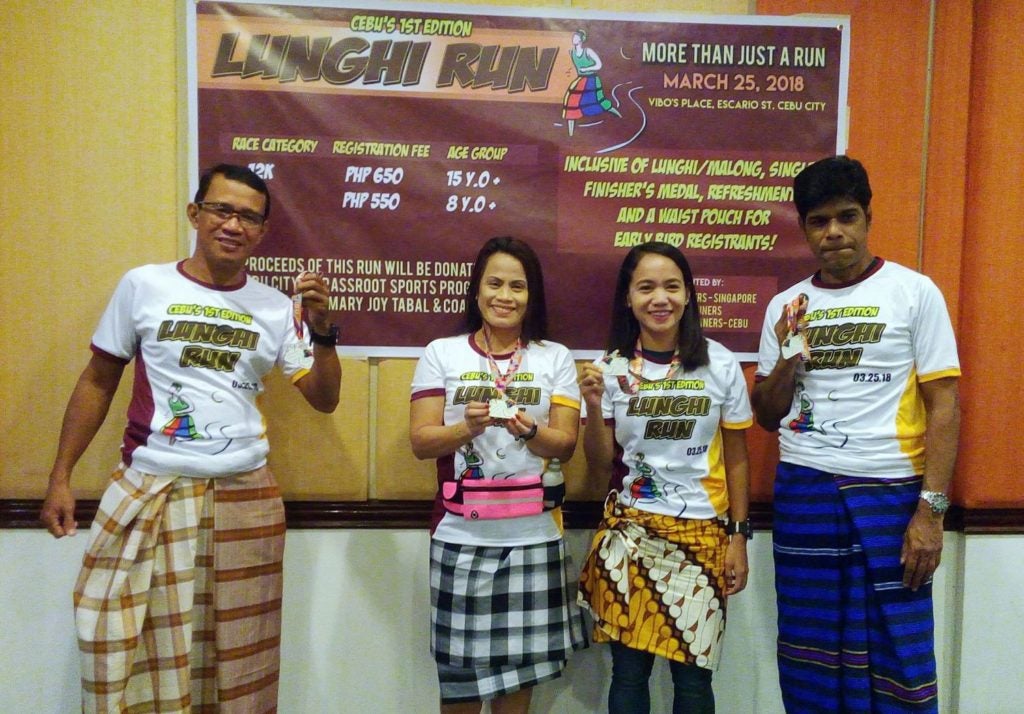 A traditional garment worn in various countries in south Asia will be highlighted in an upcoming running event in Cebu.

The Lunghi Run, slated March 25 starting at the Vibo Place in Escario Street in Cebu City, features the lunghi garment—also spelled as lungi— that is similar to a sarong which is wrapped around the waist and extending to the ankles and worn in countries such as India, Bangladesh, Pakistan, Nepal, Cambodia, Myanmar, and Thailand.

The event is organized by Lunghi Runners-Singapore spearheaded by Ali Akbar, the TAD Runners of Willie Estepa and Hello Kitty Runner-Cebu of Annie Penaroya.

Akbar, who first organized the run in 2013 in Singapore, started the Lunghi Run because he wanted to promote friendship and respect among races with the proceeds going to a charity. Akbar also finds running in a lunghi comfortable.

“We used this concept to raise awareness about unity. That we are all humans regardless of religion and race,” said Akbar in a press launching last Monday evening at the Cebu Grand Hotel.

“This is not just an ordinary run. You run for fun, you run for fitness, or you run with different goals, but with this event, you are not only running, but you are helping kids to reach their goals, to reach their dreams,” said Tabal.

The running event features 12-kilometer and 6k distances. Registration fee is P650 for the 12k distance and P550 for the 6k.

“I am very grateful that the Lunghi Run has chosen our grassroots program to be their beneficiary as this will be a big help in further training the kids as well as in identifying their potential,” said Dueñas.

Apart from the race singlet, participants will also get a lunghi with different patterns and designs. A waist pouch will be given to the first 200 registrants in the 12k or until January 30, whichever comes first.

Since the event is a fun run, no winners will be declared. However, finishers will get a finishers medal made in Singapore.

Read Next
Kids chained in house of horrors; parents arrested