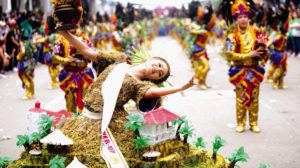 Why the Sinulog Festival 2018 is a success

These were some of the adjectives used by Cebuanos, domestic and foreign tourists, and Sto. Niño pilgrims to describe this year’s Sinulog Festival, as it culminated yesterday with Holy Masses and a mardi gras-like dance parade that drew two million people to the Basilica Minore del Sto. Niño and to the streets of Cebu City.

The heavy rain in the morning that turned into a drizzle in the afternoon, the parade route barricades and the suspension of mobile phone signals did not deter spectators from having a good time or from taking part in the solemn Masses at the Basilica that went from morning until evening.

These two million people, a mix of Sto. Niño devotees and local and foreign tourists who were out to have fun while following the rules set by the Cebu City government for the Grand Parade, were the reasons why the Sinulog Festival’s culminating events were generally peaceful and a resounding success.

The religious events on Saturday, particularly the solemn procession along Cebu City’s major streets, was attended by about half a million devotees but it remained orderly and peaceful.

“Amazing how orderly such a large crowd can be when they know the reason they’re together,”noted Cebu City Mayor Tomas Osmeña in a post on his Facebook page on Saturday.

As the festivities were wrapping up on Sunday, Cebuanos found more reasons to celebrate as the top two prizes in the Sinulog Grand Finale – the Best in Sinulog-based and Free Interpretation categories, were won by Cebu contingents, Carcar City and Daanbantayan, respectively, which was a first in a long while that the two coveted awards, each carrying a P1 million prize, were won by Cebuano participants.

An out-of-town dance troupe and a crowd favorite, the Tribu Buyoganon of the municipality of Abuyog in Leyte, however, won Best in Street Dancing, which also came with a P1 million prize. (see list of winners on page 4).

The winners were among 30 dancing contingents who, along with 48 floats, 27 higantes (giants), and eight puppeteers, took part in culminating event of the Sinulog Festival, considered the “mother of all Philippine festivals.”

The Sinulog Grand Parade, the culmination of the 12-day festivities to celebrate the feast of the Señor Sto. Niño, kicked off with a Mass at the Cebu City Sports Center (CCSC) at around 11 a.m.

At about 3 p.m., while the dance parade was in earnest amid a drizzle, the crowd peaked at around 1.4 million, according to Police Regional Office in Central Visayas (PRO-7) spokesman Supt. Reymar Tolentin.

But as the hours progressed, the crowd grew larger, heading either to the Basilica, where the Apostolic Nuncio to the Philippines Archbishop Gabriele Giordano Caccia was scheduled to officiate the 5:30 p.m. Mass, or to the streets to watch the final dances and the separate firework displays set from 7 p.m. to 8 p.m. at the SM City and Ayala Center Cebu malls and at the Cebu City Sports Center, where the final judging of the dance troupes were held.

Supt. Julian Entoma, the acting director of the Cebu City Police Office (CCPO), said the crowd for the various activities in Cebu City on Sunday was estimated to have reached 2 million by sundown.

Entoma said the signal shutdown and stricter rules on liquor and parties did not affect the number of spectators and pilgrims, which actually increased from last year’s 1.5 million.

(The crowd is still big. Those who watched the grand parade were also devotees of the Sto. Niño. They did not come for the revelry and the drinking. Sinulog is for the Sto. Niño)

The spectators clearly did not mind the “inconvenience” of losing mobile phone signals from 8 a.m. to about 8 p.m. on Sunday.

Among those in the crowd on Maxilom Avenue was Leah, 17, a junior high school student from a private university in Cebu City, who said they also experienced the signal shutdown last year and they still had fun taking selfies, photos and videos of the Grand Parade, which they intended to upload on their Facebook pages when internet connectivity became available.

But for Jeanette Hermosilla, the absence of a phone signal caused her a lot of trouble yesterday.

Hermosilla, a Sto. Niño devotee who attended the 11 a.m. Mass at the Basilica, said it took them almost an hour to track their companions who got lost because of the huge crowd. She lamented it would have been easier if they were able to communicate by cellular phone.

“Lisod ang walay signal kay kon naa kay kasabot kay wala kay contact niya (It is difficult if there is no signal because you cannot locate the person you have arranged to meet),” she said.

For British national Lucy Douglas coming to Cebu to witness the Sinulog Festival for the first time was worth the trip: “I see lots of people with a high level of excitement. I really had fun.”

For those who stayed on Gen. Maxilom Avenue to witness the Grand Parade from morning to afternoon, the thickening crowd was almost unbearable, which, by nightfall, became rowdier.

Gertrude Anggan, 63, a retired Overseas Filipino Worker (OFW) who resides at Barangay Capitol Site, said she was peacefully watching the contingents parading down the street earlier in the day, until at around 1 p.m. when a rush of spectators arrived, making it difficult to even move.

Anggan believed that the people might have opted to crowd on the streets and watch the street dance parade instead, as the Gen. Maxilom area, which is dotted by bars and restaurants, were banned from serving liquor and beers and from hosting parties, unlike in the previous years.

When CDN spotted Anggan, she was standing right outside a Chinese fastfood chain located approximately five meters from the corner where Gen. Maxilom intersects with Juana Osmeña Street.

The area later identified by the police as one of the choke points as the Grand Parade progressed yesterday.

Teams of policemen from the Cebu City Police Office (CCPO) deployed at these locations reported that while the crowd was at first manageable, its size rapidly doubled, which led to a nearly stationary flow of spectators going in and out of Gen. Maxilom Avenue.

The crowd dispersed when additional law enforcers arrived past 3 p.m. yesterday but returned later at night, with mostly young people carousing on the streets, getting boisterous and unruly, some of whom were seen smearing paint on the faces of passersby.

The police, including those from CCPO’s Special Weapons and Tactics (SWAT) team, paid special attention to General Maxilom Avenue since it was where a stampede occurred during last year’s Sinulog Grand Parade caused by the rowdy behavior of intoxicated youths.

Among those being watched were members of the rival fraternities Tau Gamma Phi and Alpha Kappa Rho who were seen converging yesterday afternoon along the vicinity of Mango Square on Gen. Maxilom Avenue.

But Entoma said the police did not receive reports of any untoward incidents during the Grand Parade, except for some problems with crowd control and a few incidents of petty crimes.

Among the crimes reported to the police involved municipal Councilor Renillo Gullem of Daanbantayan town who went to the Fuente police station to report that he lost his wallet containing P27,000. /With CORRESPONDENTS NORMAN V. MENDOZA AND JESSA MAE O. SOTTO AND USC INTERN THERESE MAE ALEGADO