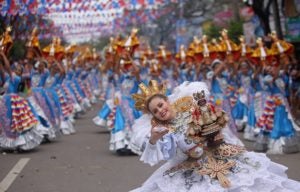 After being dominated by out-of-town contingents in the past few years, it was Cebu’s turn to come out on top in this year’s Sinulog Grand Parade.

Tribu Kandaya of the northern Cebu town of Daanbantayan bagged the title for the Free Interpretation (FI) category while the Carcar City Division won the title in the Sinulog-based (SB) category.

Tribu Buyuganon Festival of Abuyog town, Leyte province was the only out-of-town contingent that won the top prize in the competition’s three categories, capturing the Street Dancing category.

The three contingents will each receive a P1 million cash prize and a trophy during today’s awarding ceremony at the Cebu City Sports Center (CCSC).
All top winners will also be giving an encore performance.

Nestor Jardin, chairperson of the board of judges for the FI category, pointed out that all components of Tribu Kandaya’s performance blended well together.

“All the production elements contributed to the overall impact of the dance – the costumes, props, music – and the focal point was really the dance rather than the props or the music,” he said in last night’s press conference to announce the winners.

Tribu Kandaya also won the Best in Costume for the FI category with their sparkling golden body suits and placed fourth in the Street Dancing category.

It was a sweet comeback for the group after finishing fourth place in 2011. They also last won a championship in 2003.

Last year’s winner for the FI category was the Land of Beauty and Bounty of Lanao del Norte province which skipped this year’s competition although they joined in the float competition.

Carcar City Division also starred in this year’s Grand Parade as they won their first ever championship for the Sinulog- based category after several years of joining the contest.

“In the three decades I’ve been judging the Sinulog, I have seen the growth of Carcar. I’d like to specially mention that Cathy (Estenzo, their

choreographer) is a very consistent thinker of good concepts,” said Larry Gabao, chairperson of the board of judges of the SB category.

Gabao is the vice head of the national committee on dance of the National Commission for the Culture and the Arts (NCCA).

Last year’s champion was the Sinanduloy Cultural Troupe of Tangub City which also skipped this year’s Sinulog Grand Parade as they are busy with their 25th anniversary.

For the street dancing category, Tribu Buyoganon reclaimed the top prize which they last had in 2016. The group did not join last year’s competition.

Their signature bee-inspired costumes and energetic movements drew cheers from both judges and the crowd.

Lordinio Vergara, chairman of the board of judges for the Street Dancing category, said Tribu Buyoganon’s street dancing performance was “spectacle.”

A fireworks display and a musical theater production capped off this year’s Sinulog Grand Parade and dance presentation at the Cebu City Sports Center last night.

Choreographer Victor Cuenco said the finale entitled “Kita ang Sugbo, Salamat kang Señor Sto. Niño” is a drama in which an elderly woman told the story of Cebu’s past, its present and future through Cebuano music and dance to her children.

Cebu-based and community-based dance troops performed with the grand winners of Sinulog Idol and the University of Cebu theater company.

Though the organizers targeted to end the presentation at 4:30 p.m., it was delayed due to the number of contingents as well as the rain and brownout during the opening Mass.

Sinulog Foundation Inc. executive director Ricky Ballesteros said the rain was a blessing from the Sto. Niño since it didn’t stop the Sinulog celebration which ended at 8 p.m. with a seven-minute fireworks display./Reporter Jose Santino S. Bunachita and Correspondent Doris Mae C. Mondragon