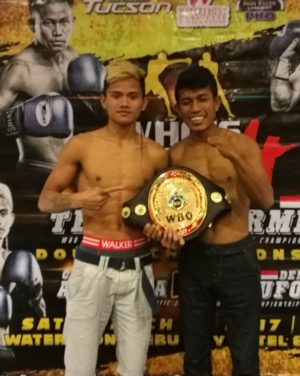 Christian “The Bomb” Araneta has just overcome an obstacle many thought would end his flourishing boxing career.

The 22-year-old Araneta, one of Omega Boxing Gym’s top boxers and the reigning World Boxing Organization (WBO) Oriental light flyweight champion, suffered a shoulder injury last year but is now back training for his comeback fight in March.

The unbeaten Cebuano boxer was scheduled to defend his title against fellow Filipino pug Jesse Espinas in the co-main event of “Who’s Next? 5” last June 2017 in Tagbilaran, Bohol but suffered the injury roughly a week before the fight. He tore a muscle in his right shoulder during training that required surgery.

“I lost hope when I suffered this injury because many told me that it could end my career,” Araneta told Cebu Daily News.

But Araneta’s promoters never gave up on the promising boxer who has 14 wins, 12 by knockouts, and no losses.

“They always motivated me that [my shoulder] will be fixed and I will be back in the ring in no time. I was scared that I might not fight again but luckily I have a very supportive promoter who is always there for me,” Araneta said.

He underwent surgery a day after he suffered the injury. All of the expenses were shouldered by Omega Pro Sports International (OPSI), Araneta’s promoter.

After the surgery, he also underwent therapy and slowly recovered over time.

Just after New Year’s Day, Araneta went back into training, hit the bags and did some mitts with his coaches at the Omega Boxing Gym. A few weeks later, he added sparring to his training.

“I am still recovering and I can feel that it’s healing very well because I can spar already,” Araneta said. “I really missed boxing. I just hope that I am allowed to fight soon and rise up in the rankings again.”

Araneta won by knockout in five of his last seven bouts. He is considered as one of the top prospects in the Philippine boxing scene and is looking forward to fighting again.

“They told me that I am having my comeback fight this March and I can’t contain my excitement when I learned about the good news,” said Araneta.
OPSI, though, has not announced the exact date of Araneta’s comeback fight and who will be his opponent.

Araneta has been inactive in boxing for almost a year already. Last year, he only had one fight against unheralded Indonesian Demsi Manufoe held last March 3 at the Waterfront Cebu City Hotel and Casino. He won the WBO Oriental light flyweight title by knocking out the latter in the first round.