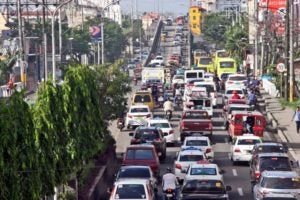 Creation of other metropolitan areas in the north and south parts of Cebu remains to be the way to go for development in order to decongest the existing Metro Cebu area.

Architect and urban planner Felino “Jun” Palafox Jr., in a talk about urban planning development in the Visayas area, said it is important to establish other metropolitan areas where residents could get everything they need so that they will not have to go back to Metro Cebu.

“We should create more metropolitan areas in Cebu. Aside from Cebu City, there should be one in the north and another one in the south. By doing that you are helping Cebu,” he said.

Palafox was the guest speaker during the general membership meeting of the American Chamber (AmCham) Visayas last Thursday evening at Bai Hotel.

He said that the current Metro Cebu, composed of the cities of Cebu, Mandaue, Talisay and Lapu-Lapu, is already very saturated in terms of development.

Aside from developing new metro areas, he also suggested that Metro Cebu cities should have better sidewalks for people to be forced to walk and eventually help traffic congestion.

He said more people walking would remove excess cars on the road network which had not been able to cope with the growing number of cars using these roads.

Back in the 80s, Palafox shared that the growth of Cebu was envisioned to be within the Banilad and Lahug areas in Cebu City and all the way to Mandaue City.

“But now, this area is overbuilt. So maybe we could go to the other side, in the reclamation up to Minglanilla (town). These areas could serve as counter-magnets,” he said.

He added that it is important to make sure that developments outside Metro Cebu should be holistic so that people will have everything they need within the area and will not have to go back to Metro Cebu.

During the event, AmCham Philippines executive director Ebb Hinchliffe, highlighted Cebu’s worsening traffic problem as something that needs to be addressed.

He recalled that several years ago, travel time from the Mactan airport to Marco Polo Hotel only took 30 minutes but now it takes up to two hours.

Hinchliffe added that there must also be proper planning before doing any infrastructure development.

Officials in Cebu agreed with the observations and suggestions of Palafox.

Roy Soledad, Cebu Investment and Promotions Office (Cipo) head, said that the development of other metropolitan areas within Cebu is already part of the provincial government’s visions and plans.

He said this is one of the top priorities of Cebu Gov. Hilario Davide III, specifically countryside development which is number two on the governor’s six-point agenda.

“But since you cannot make cities unless you create opportunities in those areas, that is why the plan of the province is to put up economic zones in the north and south,” Soledad told CDN.

Among the plans presented to them by the Cebu Provincial Planning and Development Office (PPDO) is to put up economic zones somewhere in Bogo City or Medellin town in the north which could also spillover to Daanbantayan town.

For the south, it would be somewhere after Carcar City to Argao town.

Soledad said they also plan to put another economic zone in the western part of the province in the Balamban and Toledo City areas.

“We are planning to have a feasibility study this year on these economic zones. The study will be conducted by Jica (Japan International Cooperation Agency). We are also exploring the possibility of putting another airport in Medellin,” he said.

He added that it’s important to make sure that these plans will be backed by studies first before the government or private sector could go ahead and start developments in these areas.

Gordon Alan Joseph, chairperson of the executive committee and integrated development committee, and co-chairperson from the private sector of the Metro Cebu Development and Coordinating Board (MCDCB), said the need to establish additional metropolitan areas has already been identified several years ago.

“What is needed though is serious connectivity. You need to have adequate roads and systems to allow people to go to and from these new centers. It’s good to create centers but infrastructure requirements will be quite heavy,” Joseph told CDN.

And just like Soledad, Joseph said these plans need to be backed by a detailed masterplan study.

At the same time, strong political will from public officials and politicians is also need to ensure that these studies are implemented properly.

On the part of the private sector, there is also a need to lay down the basic requirements like infrastructure, transportation systems, road networks in order to entice more developers to go northward and southward.

Jose Soberano III, president and CEO of Cebu Landmasters Inc. said though that it is already slowly being done especially in terms of housing which has already reached these farther areas.

“The only reason why people are still living in the city (Metro Cebu) is because their place of work remains to be here. So there should be dispersal of businesses and also of industries,” he said.

Soberano said this could already be seen especially in the town of Minglanilla in the south which has developed more in recent years.

Bogo City could also be a major hub as it is accessible to Masbate and other northern provinces, he added.

Public infrastructure like the Cebu Cordova Link Expressway (CCLEX) project that connects Cordova town on Mactan Island to Cebu City in the South Road Properties could also boost progress in the south.

In the north, he said the upcoming international port in Liloan town could also help decongest Metro Cebu.