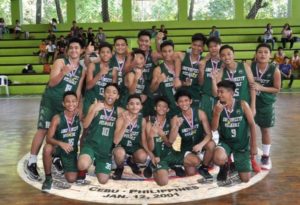 The Under-15 team of UV celebrate after winning the title over USC-North.
contributed

IT WAS double the celebration for the University of the Visayas (UV) as its Under-15 and Under-12 squads captured championships in their respective divisions in the Cebu Youth Basketball League (CYBL) 3rd Conference last Sunday at the Talisay City Sports Complex.

In the Under-15 class, UV got off to a fast start and then, hung on down the stretch to author a 70-58 win over the University of San Carlos (USC) North.

UV surged to a 6-0 lead a mere minute into the match as its full-court pressure defense proved to be a puzzle that USC could not solve.

The lead eventually ballooned to 20, 57-37, heading to the last period before USC finally got its rhythm behind ace guard Reinhard Jumamoy, who scored 12 straight to trim the deficit to six, 55-61, 3:40 to go.

But boy wonder Steve Nash Enriquez stepped up and converted a triple with the shot clock winding down to bring UV’s lead back to nine, 64-55, with 2:45 left.

UV was never threatened after that.

Enriquez paced UV with 15 markers while Neil Fajardo backed him up with 11.

In the Under-12 division, Daniel Padilla scorched the nets and tallied a whopping 36 points to tow UV to an 86-74 win over SHS-Ateneo de Cebu.
The game was closely contested until the fourth, when UV scored 14 unanswered points to build a 77-59 lead with 6:11 left.

Marc Abangan sparked the breakaway with three three-pointers while Padilla shuffled in five markers during that pivotal stretch that essentially placed the win and the title in the bag for the boys in green.

Abangan tacked on 16 points for UV.

Kristian Porter and Jared Bahay were the high-point persons for Ateneo de Cebu with 15 and 13 points, respectively.