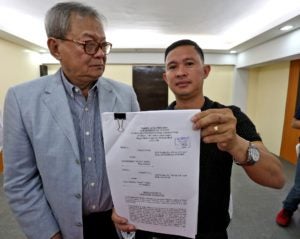 FORMER City Market Administrator Winefredo Miro claimed yesterday that the common-law wife of slain Ermita Barangay Captain Felicisimo “Imok” Rupinta was the person who had the most possible reason to kill Rupinta.

Miro asked that Jocelyn Mendoza be investigated instead in the killing as he denied the murder allegations in a complaint filed against him in a counter-affidavit he submitted at the Provincial Prosecutor’s Office on Monday.

Miro said that the complaint filed against him by the Regional Special Operations Group in Central Visayas (RSOG-7) be dismissed for lack of probable cause.

In his counter-affidavit, he said that a thorough investigation be directed instead to Rupinta’s common-law wife, Mendoza.

He said Mendoza is the “unscathed survivor” and the person who is the most knowledgeable as to the possible reason why somebody has an interest to kill Rupinta in his incumbency as the village chief.

“I am not a killer; neither do I have the instinct of a killer nor ambition of becoming one; I will repeat it that I am not responsible in any manner whatsoever for the death of Imok; That I have not done any act which can be construed as an attempt against the life of Jocelyn,” a portion of the counter-affidavit read.

Solima, in a phone interview with Cebu Daily News yesterday, said that Miro’s camp was just attempting to shift public opinion and attention away from the accused as the mastermind.

“Binuang ra na ilaha. Pang divert ra na (That’s their joke It’s just a diversion). If you are asking if we have a strong case against him (Miro), why not? He’s the mastermind,” Solima said.

In Miro’s counteraffidavit, he cited Mendoza’s economic and financial interest in Ermita claiming that this is known in Ermita.

He also cited that Mendoza was knowledgeable and familiar with the extent of Rupinta’s influence in business interest and other activities and he mentioned the possibility of the alleged insecurity of Mendoza over alleged relationships of Imok.

In a press conference yesterday, Miro’s legal counsel, lawyer Edgar Gica, said the RSOG-7 should go deep into the case as there is more to it.

He said RSOG-7 must be fair enough that they will continue to investigate the case as there is a possibility that Mendoza “might be part and parcel of how Imok was ambushed and killed.”

Last November 23, 2017, Rupinta and Mendoza were ambushed on their way home in Barangay Yati, Liloan town. Mendoza survived the attack.

Gica added that should RSOG-7 fail to conduct exhaustive and moral investigation of the case, they will ask the National Bureau of Investigation (NBI-7) to work on the case.

To recall, the charges against Miro stemmed after Mendoza claimed that Miro and the others might have been involved in the killing of Rupinta considering the longstanding feud between Miro and Rupinta over the vendors association and other sources of income in the Carbon Public Market.

Miro denied Mendoza’s allegations, however, he admitted that he and Rupinta differ sometimes in their opinions.

Kauswagan (BOPK) as he was one of Rupinta’s few options to connect with the political party. /With a report from Correspondent Morexette Marie B. Erra,