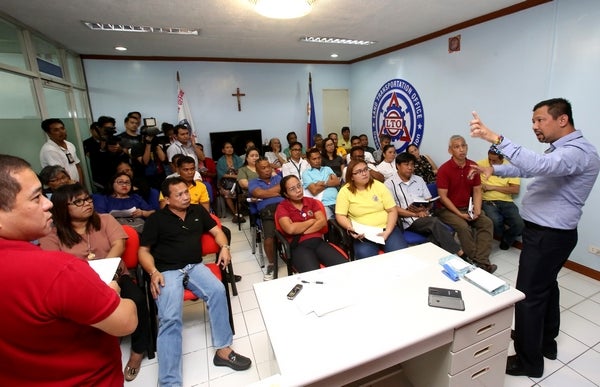 THE Land Transportation Office in Central Visayas (LTO – 7) is urging Cebu bus operators to invest in dashboard cameras to help hasten the investigation of accidents and road altercations.

Newly-appointed LTO – 7 regional director Victor Caindec told the representatives of more than 50 bus owners belonging to the Cebu Provincial Bus and Mini-Bus Operators Cooperative (CPBMOC) that measures need to be undertaken to avoid the loss of more lives due to the recklessness of others.

“I want to work closely with you and other stakeholders to ensure road safety. The best you can do perhaps is to invest in a dash cam,” said Caindec during the operators’ courtesy call at his office yesterday.

“This is only a suggestion,” said Caindec explaining that only the Land Transportation Franchising and Regulatory Board (LTFRB) and not the LTO had the power to regulate buses.

Caindec’s suggestion came three days after, a van-for-hire carrying three Israeli tourists, hit and killed an elderly pedestrian as she was about to cross the national highway in Barangay Montañeza, Malabuyoc town.

Last month, another tourist van crashed into a roadside tree in Alegria town killing seven of its Filipino-American passengers.

Caindec noted that dashboard cameras will document the things going on in our roads and help the investigation process during mishaps.

“Even though it means more expenses for our operators, the safety of our commuting public is also our interest,” Flores said.

A department order issued last June 2017 by LTFRB also requires all operators of PUVs to install closed-circuit television cameras (CCTVs), speedometers and a GPS system to monitor their drivers.

PUV operators nationwide were given until the end of 2021 to comply with the order or face the revocation of their franchise.

Meanwhile, the Provincial Tourism Office (PTO) urged tourist transport service providers as well as the tourists themselves to properly scrutinize

PUV drivers prior to booking their services.

“We advise the riding public and for the tourists, in general, to choose transportation service providers which are legitimate, and possesses and present the necessary documents as proof,” said PTO chief Joselito “Boboi” Costas.

“I always make it a point to check the condition of the driver. When was the last time he slept, and whether or not he’s hungry or not feeling well, before actually asking him to drive,” he added.