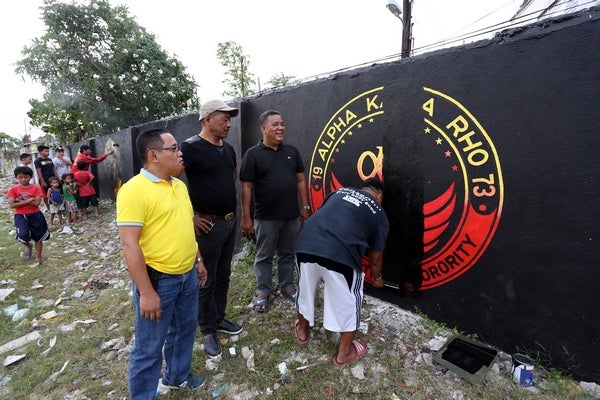 To avoid escalating frat wars in Cebu City, the Tau Gamma fraternity volunteered to remove their logos from the city’s walls starting yesterday.

Tumulak, also concurrent deputy mayor for police matters, said they tapped sponsors to repaint the walls that were cleaned up by Tau Gamma.

He said the city government is also calling on other fraternities to cooperate with them.

“If they remove their logos, no one from the rival fraternities will remove and vandalize them and this would prevent clashes among them. Those logos will only entice those who have criminal records or a history of criminal activities,” Tumulak said in Cebuano.

He said social media posts on the recent shooting incident in Barangays Busay and Punta Princesa have sparked speculations of frat wars.

“That incident was also followed by a shooting incident involving a Tau Gamma member giving rise to suspicions that it was a frat war. But to clarify, these shootings are unrelated,” the councilor said.

“We will help them. We will implement a program demonstrating how to clean a vandalized wall and we’ll be working with Island Paint,” the mayor said in yesterday’s press conference. The pilot area for the project would cover Barangays Bulacao to Mambaling, he said.

Both the police and Tumulak were scheduled to accompany Tau Gamma in yesterday’s activity.

Osmeña said they are only waiting on other fraternities like Alpa Kappa Rho to join the program.