Edsa and the city: Life and liberty 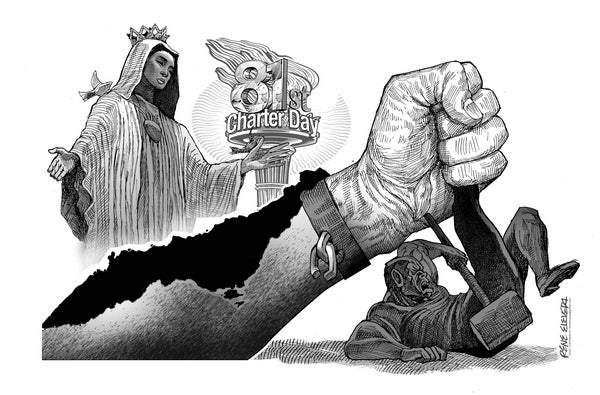 That people touched by the capital city of Cebu — which celebrates its 81st Charter Day today — are at the forefront of defending our lives and liberties is a source of hope.

Former Chief Justice Hilario Davide is among the prime movers of the opposition to Charter change while lawyer Democrito Barcenas is a convenor of Cebu for Human Rights coalition.

It is no coincidence that both were lights in the nationwide events that culminated 32 years ago in the dismantling of the Ferdinand Marcos dictatorship through the 1986 Edsa People Power Revolution.

In them and in others, Cebu City is continuing a necessary tradition as bastion of resistance to the spirits of hegemony and anti-democracy that tend to possess Malacañang.

The tragedy is that they are being denied total enjoyment of their golden years, the peace of which they deserve after having battled an oppressive regime.

Salvaging and the enforced disappearances of the Marcos days are resurgent in today’s extrajudicial killings by gunmen hired to snuff out rumored or suspected wrongdoers.

Blind to the human right to due process, the carnage has felled lawyer Jonnah John Ungab, Ermita Barangay Captain Felicisimo Rupinta and others less prominent.

Trivializing the law, which was en vogue during the dictatorship is back with a vengeance.

How else can we characterize drafts of a new Constitution that extend the term limits of incumbent officials and exempt them from income taxes, not to mention remove love as a bedrock of our polity?

While we celebrate the charter by which Cebu City gained substantial administrative, political and fiscal independence as a Philippine locale, there are deeper measures of progress in the city.

Chief of these is its capability to raise citizens’ quality of life and maximize their application of their liberties.

Second is the courage that its people have to defend life and liberty when the signs of the times so demand, just as Cebu City’s elders and the men, women and children of 1986 Edsa People Power Revolution braved an autocrat’s guns and tanks with prayer, flowers and goodwill.

Where living conditions in Cebu City are failing as in traffic, pollution, disease and flooding, they fail because of our myopic, individualistic and divisive drives for success and prosperity at the price of belittling the common good.

If we truly care, what goes for Cebu City goes for the rest of the country.

Since the alternative is doomsday, we must, starting in Cebu City, learn anew to hold wealth and power not as commodities to justify cannibalism but as means to let flourish the lives and legitimate freedoms of all.

Read Next
Stories and magic