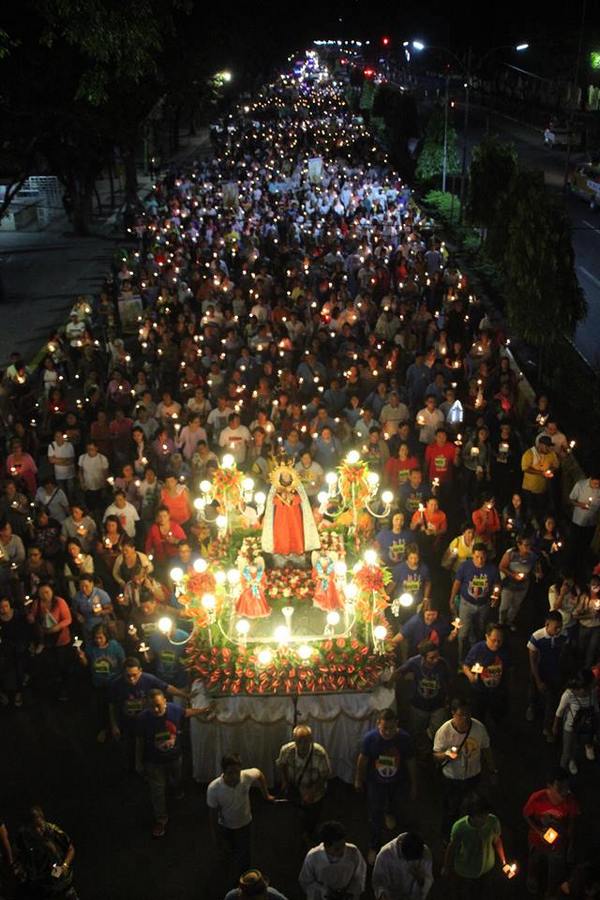 Thousands join the Walk for Life with Mary, a dawn procession from Fuente Osmeña to the Cebu Metropolitan Cathedral in Cebu City.
CDN PHOTO/SAMMY NAVAJA

WALK FOR LIFE WITH MARY

Bringing lighted candles while praying the rosary and singing chants, at least 5,000 people joined the dawn procession on Saturday to denounce the series of killings in the country and to seek divine intervention to get rid of all threats against life and family.

The 67-year-old prelate also presided over the Mass at the Cathedral to close the event.

In his homily, Palma reminded the people about the sanctity of life, marriage, and family.

He stressed that the Catholic Church supports President Rodrigo Duterte’s campaign against illegal drugs but is concerned about the way it is being carried out.

“We question the manner it is done because of questionable motives and circumstances. This may not be the will of God for them,” he said.

Palma said no person has the right to kill a fellow human being since life belongs to God.

“No man have the right to take the life of another. God is the beginning and end of life. Let us protect life from womb to tomb,” he said.

“I hope all threats to life and the series of killings will stop because we are all brothers and sisters in Jesus and Mary. The Lord came that we may have life and live it to the full,” he added.

In a circular he earlier released, Palma said the “Walk for Life with Mary” was aimed at asking God, through the intercession of the Blessed Virgin Mary, to preserve the country from all forms of evil.

“We shall call upon the Blessed Virgin Mary, Our Lady of Guadalupe, patroness of Cebu, to intercede for us during this crucial time in our country, to protect the sanctity of life and family, the weak and vulnerable, the unborn children and those who suffer from addiction, violence, and injustice,” he said.

Representatives from the different parishes, schools, and other institutions in Cebu joined the dawn procession and Mass.

An image of the Our Lady of Guadalupe de Cebu, the patroness of the archdiocese, was used during the procession.

Supt. Emily Santos, deputy director for operations of the Cebu City Police Office, estimated those who joined the procession and Mass at 5,000.

“It was generally peaceful,” she said.

Fe Barino, chairperson of the Cebu Archdiocesan Commission on the Laity, expressed gratitude to those who joined the prayer walk and Mass.

She said prayer is a powerful tool to confront various threats against life, marriage, and family.

During the Mass, representatives from the different sectors—priest, police, doctors, lay person, religious organization—prayed the different intercessions in the Prayers of the Faithful.

Concelebrating with Palma were retired Bishop Antonio Rañola and about 10 priests.

The Catholic Chuch, in particular, voiced out concerns over the series of killings in the country since the war on drugs was started by President Duterte in July 2016. Church leaders also opposed the different bills that destroy the sanctity of life such as divorce.

Read Next
Business, robbery eyed as motives in Korean killing