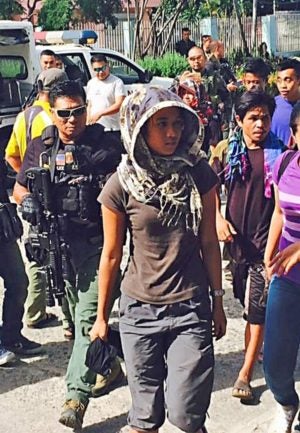 Charges of illegal possession of firearms and explosives were filed against six alleged communist rebels who were captured in a hinterland village of Mabinay town, Negros Oriental on Saturday.

This developed as one of the accused, Myles Albasin, a leader of a militant youth group in Cebu, insisted in an interview that she did not own a firearm and that she was only in Barangay Luyang of Mabinay town to learn about the plight of struggling and poor farmers.

Albasin, speaking briefly to dyMD Energy FM based in Dumaguete City, was however evasive about the other circumstances leading to her capture and of five others at dawn on Saturday, even as her colleagues and friends in Cebu raised concerns over her safety in the wake of her arrest.

Albasin, 21, and her five male companions — including an 18-year-old from Mandaue City, were brought to the Hall of Justice at the capital city of Dumaguete on Sunday to undergo inquest proceedings on the complaint filed against them by the military.

They were later detained at the Negros Oriental Provincial Detention and Rehabilitation Center (NODRC) after they refused the inquest proceedings and opted to undergo a preliminary investigation.

Negros Oriental Provincial Prosecutor 1 Cathy Cardino-Samson said she received the complaint for illegal possession of firearms and explosives against the six suspects before noon on Sunday.

She said the suspects were given 15 days to file their counter-affidavits after they waived their right to undergo the inquest proceedings. The suspects were assisted by Lawyer Garry Tabios of the Public Attorney’s Office (PAO) in Negros Oriental.

Samson set the clarificatory hearing for the case on March 19.

When interviewed by dyMD Energy FM, Albasin said they were at the hinterland of Sitio Tumonon of Barangay Luyang to discuss with the farmers why they were poor.

But when asked if she owned the firearms allegedly taken from her and her companions, she answered in Cebuano: “Sa organization. Dili to amoa.” (Its not ours. It belonged to the organization.)

When asked what organization she was referring to, she responded: “Basta iya to sa organisasyon to siya.” (Those were owned by the organization)
She declined to answer when asked how the firearms ended up with her and her companions.

Albasin insisted they were in the remote village only to “know the real situation” and to see for herself the condition of the farmers.

She said she discussed a number of issues with the farmers, foremost of which was to make them understand the kind of public services they were entitled to.

Albasin, a native of Cagayan de Oro City, is a graduate of Mass Communications at the University of the Philippines Cebu in June last year. She also headed the Cebu chapter of the militant youth group Anakbayan.

The troops, Banes said, were instead met by gunfire, which prompted the soldiers to fire back. After a 45-minute gunfire, they captured the rebels including an “amazon,” later identified as Albasin.

Albasin was a member of progressive groups when she studied in Cebu for four years. After graduating last year, she became secretary general of the Cebu provincial chapter of Anakbayan, according to Joisa Cesista, the group’s current chairperson.

But Cesista said they had not heard from her following their event with the groups of Lumads and the Moros in August last year.

The Nagkahiusang Kusog sa Estudyante (NKE), a leftist student organization in UP Cebu where Albasin was also a member, said they refused to accept the military’s “publicity stunt” surrounding the arrest of Albasin.

On their Facebook page, the group said Albasin was “steadfast in the struggle of the exploited and oppressed masses.”

“Because of the heightening crisis in the larger society, the people, especially the youth, have heeded to take on the most advanced form of struggle in the hopes of alleviating our nation from the shackles brought upon by the fascist and anti-poor US-Duterte administration,” the post further read.

On Sunday, Anakbayan Cebu issued a strongly worded statement that raised an alarm over Albasin’s arrest.

“The arrest of Albasin is alarming since the reactionary military forces have a track record of violent and inhumane treatments of their captives especially women,” the group said in a Facebook post.

They cited several previous incidents including in 2014 when UP Diliman student Recca Monte was captured and later found dead with injuries on the head, face, and chest.

They also said women activists Josephine Lapira and Kamil Manangan were “brutally murdered” and barely recognizable after an alleged encounter with the Armed Forces of the Philippines (AFP) in November 2017.

Anakbayan Cebu also stressed out the recent remark of President Rodrigo Duterte encouraging the military to shoot women rebels in their vagina, a statement they described as “misogynistic” and “macho-fascist.”

“We fear for her and her companions’ safety as the military might closely have suspicious intentions behind this,” the post further read.

In rejecting peace talks with the rebels, President Rodrigo Duterte earlier vowed to crush the NPA and ran after the so-called “legal fronts” of the rebel group.

In Agusan del Norte, the military arrested a couple allegedly behind the recruitment of minors into the NPA.

1Lt. Teresita Ingente, spokesperson of the Army’s 4th Infantry Division based in Cagayan de Oro City, said Aladin Apolinaria, 49 and his wife, Luzviminda, 45, were arrested in Barangay Mahayahay on Saturday based on a court warrant after they were sued by two rebels, who pointed to them in December as their recruiters.

Glenie Omahas and Garry Alimboyong claimed they were recruited by the couple when they were still minors and had filed human trafficking and child abuse charges against them. No bail was recommended for the charges filed at the Regional Trial Court Branch 34 in Cabadbaran City, she said.